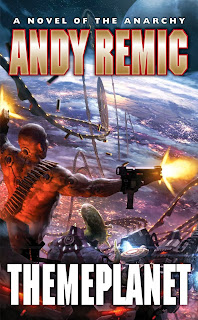 Theme Planet by Andy Remic (Solaris, pb, 384pp). Dexter Colls needs a holiday. Investigating some shady business going down in the rough side of town, he was lucky to avoid being blown up, and it’s starting to get to him. Where else would a family man take his adoring wife and more or less adoring kids but Theme Planet: it’s better than drugs, better than sex, and “if you haven’t been sick, you soon will be!” Rollercoasters stand five kilometres high and plunge an equal distance beneath the waves. A reluctant Dex slowly unwinds, encouraged by his family’s enthusiasm, and it’s shaping to be the holiday of a lifetime – until he wakes to find Katrina, Molly and Toffee missing from the hotel. Thus begins an orgy of mindless violence that won’t stop for wine, cheese and Spunky Spunk Chocolate until he gets them back.

Dexter’s not the only one rampaging on Theme Planet: android Amba Miskalov’s mission is to eliminate six key PR people. Given the ease with which she kills a squad of machine gunners in the opening pages, you wouldn’t expect any mission to give her too much trouble, but she has two problems to contend with: her own growing resentment at the way she’s being employed and treated, and a mysterious female voice inside her head. Between them Amba and Dex will rack up an impressive body count, but it’s a conversation between them, not a fight, that will decide the future of every man, woman, child, alien, android and SIM on the planet.

Though dedicated to Philip K. Dick, this novel’s approach to the questions of identity raised in novels such as Do Androids Dream of Electric Sheep? essentially amounts to, “Oh, I’m an android. I must be evil. What to do?” This is Dick through the eyes of Paul Verhoeven, not Ridley Scott, the novel a close relation to Total Recall. I love the Schwarzenegger films of that period, and I wish there were more of them, but what thrills over two hours can tire over ten. The pace in this novel never lets up, and some readers may find themselves slowing to a jog, waving for it to go on without them.

On the whole it’s much better than the last Remic I read. The Fanthorpisms and non sequiturs that marred Vampire Warlords (or provided its principle pleasures, perhaps) are generally absent, though one rhapsodic passage would make Lionel proud: a “mammoth ball of blue, [...] a caring Mother, the Earth, Mother Earth, Home of Mankind and Cradle of Humanity”. The novel begins a new series, the Anarchy, and in comparison to the NaNoWriMo-esque Vampire Warlords feels like a decent amount of effort has gone into it. That’s not to say it will win awards for its prose. The word “vast”, for example, is used so frequently – about sixty times – that it starts to seem like an in-joke. Theme Planet itself is not just “vast”, it’s “VAST”!

By most standards this isn’t a good book, but I don’t think it wants to be. It’s aiming to be big dumb fun, a videogame on paper, and in that it mainly succeeds. The violence is as bloody and frequent as people who like bloody and frequent violence might hope, and despite its flaws and daftness I enjoyed most of its attempts to entertain. But by the end I was ready to move on.

After a bit of editing, this review appeared in Interzone #239, back in 2012.
Posted by Stephen Theaker