Doctor Who: The Light at the End, by Nicholas Briggs, reviewed by Stephen Theaker 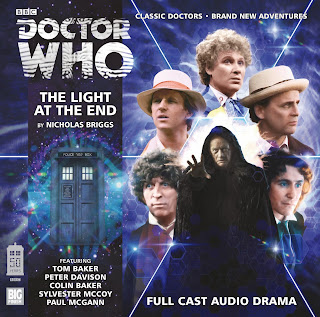 Doctor Who: The Light at the End, by Nicholas Briggs (Big Finish, digital audio, 2 hrs; purchased from publisher) gives us the impossible dream: a team-up of Doctors four (Tom Baker), five (Peter Davison), six (Colin Baker), seven (Sylvester McCoy) and eight (Paul McGann) in their prime, accompanied respectively by companions Leela (Louise Jameson), Nyssa (Sarah Sutton), Peri (Nicola Bryant), Ace (Sophie Aldred) and Charley (India Fisher). That’s not to mention cameos from Sara Kingdom, the first three Doctors (somehow!), Jamie, Zoe, Tegan, Turlough and I’m sure many others that I missed on a first listen. With all those people involved, does the story matter? You get to hear the fourth Doctor talking to the eighth Doctor! Who cares what they’re talking about?

Well, just in case you do: five of the Doctors (or their companions) notice flashing red lights on their consoles. The problem is not just the flashing, but that the lights have never been there before: they seem to have been created and set off by the Tardis passing through a specific location on November 23rd, 1963. So off the Doctors go to investigate. It’s a bit like a Justice League of America story from the sixties, as four and eight team up, and six and seven, while five has to fend for himself, before they all gather together for the big finale. Since he’s on the cover, it’s no spoiler to say that the Master is involved.

He’s played with a nice subtlety by Geoffrey Beevers, who played the decayed Master in “The Keeper of Traken” (that version having been first portrayed by Peter Pratt in “The Deadly Assassin”). I think it used to be generally assumed that the decayed Master was the Roger Delgado incarnation at the end of his life, but here he seems in slightly better condition – he’s described by an unfortunate human who encounters him as looking like he’s been “injured, burnt” – and on the cover he looks recognisably like Geoffrey Beevers, which would seem to establish him as an entirely separate incarnation from Delgado (if he hadn’t been already).

The story does show the difficulty of a story involving so many of the Doctors and their companions, in that there isn’t much time for anything else. I came away from it with a renewed appreciation of the television story “The Five Doctors”, always one of my favourites. Terrance Dicks did a brilliant job there of giving all four Doctors a moment to shine, and gave each of them memorable, quotable dialogue. In The Light at the End, Nicholas Briggs has five fully active Doctors, plus quite big cameos from three more, and so even two hours doesn’t allow time for many other speaking roles. Like Dicks with his walks to the tower, Briggs keeps things quite simple, focusing on one really sticky problem, allowing his Doctors time to talk around it.

It’s interesting that here, as in many recent television stories, the biggest danger is not that the Doctor might die, but that he might never have existed: as he approaches his regeneration limit, his past becomes more important than his future. As in previous anniversary stories, we once again see the later Doctors defer to the first – odd when the eighth Doctor is about four times older! Perhaps it’s because he’s the only one with direct memories of the Time Lord academy, while all the rest have had their youthful memories jumbled by multiple regenerations.

The absence of the tenth Doctor is a shame, given that David Tennant was working on Big Finish audios long before he took the Tardis keys, but better a contract that lets Big Finish only make stories with the classic Doctors than no contract to make new stories at all. And it’s right that Big Finish’s celebration of the programme’s fiftieth anniversary should celebrate the Doctors and companions with whom they’ve had so many terrific adventures. Caroline Johns, Mary Tamm, Nicholas Courtney and Elisabeth Sladen are of course missed even more, but well done Big Finish for giving us so many new stories with them while it was still possible.

This is everything I thought I wanted from the television anniversary episode, but don’t realistically expect to get. As many Doctors as possible, on one adventure, interacting with each other: I won’t deny that happy tears were emitted! It gave me that crossover rush without ever becoming a panto. Even if it’s with a mere two or three Doctors, I’m certain Steven Moffat will give us something special in his anniversary special, and this story does a marvellous job of clearing the decks in preparation, leaving the listener ready for whatever November 23rd, 2013 has in store, fannish cravings sated. And who knows, maybe at some point there will be a flashing red light on the Doctors’ consoles in “The Day of the Doctor”. An absolute must-buy for any Doctor Who fan.
Posted by Stephen Theaker