The Last Revelation of Gla’aki by Ramsey Campbell, reviewed by Stephen Theaker 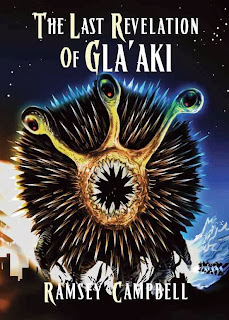 Leonard Fairman is an archivist at Brichester University, whose unwise curiosity regarding a series of occult volumes leads to his involvement in the events described by Ramsey Campbell in The Last Revelation of Gla’aki (PS Publishing, hb, 137pp; pdf ARC supplied by publisher). He is invited by Frank Lunt to Gulshaw, a run-down seaside town, to collect the series, which includes such titles as Of Humanity as Chrysalis, Of the World as Lair, On the Purposes of Night, and Of the Uses of the Dead. But Lunt has just one volume, and directs Fairman to the possessor of the next, and so it goes. Reading each of the books brings on strange thoughts and visions, and Fairman becomes desperate to leave this strange, damp, sticky little town. But everyone seems awfully pleased to have him there, and as they say: “there is so much more to see”. Or is it that there’s so much more to sea?

Fans of Lovecraft will regard it as a treat to have a writer of Campbell’s stature producing a short novel in this vein, and it provides many eerie images and scenes; anyone who has seen a British beach studded with jellyfish can imagine the kind of horrors described here. The idea of a seedy seaside town that drops its human facade in the off-season is creepily believable. (“He could have thought the town was not so much resting from its summer labours as reverting to its ordinary state.”) As Fairman finds himself stuck there for an extra day, and another day, and another, while his wife gets annoyed and his boss gets on his back, it’s hard not to empathise – though he’s given so many good reasons to run for his life that you can’t help wondering why he doesn’t.

And that was the problem for me, that the too-frequent hints about what’s going on were too knowing, too nudge-nudge wink-wink, to be truly frightening: for example hands are “glistening” and “soft and moist”, handshakes are “damp and pliable”, palms are “clammy” and “yielded so much”. The innuendo wears a bit thin, and even begins to feel like fan service. Fairman works so hard to ignore or rationalise everything he sees (“Of course the people were wearing plastic beach shoes, which made their feet look translucent and swollen”) that the reader’s eyes begin to roll. Loving pastiche comes close to tipping into presumably unintentional parody.

More positively, the book is so perfectly suited to cinematic adaptation that one wouldn’t be surprised to learn it began life as a film treatment. The role of Fairman would be ideal for Daniel Radcliffe or Dominic West, and a version of this produced to the same standard as The Woman in Black or The Awakening might give us, at last, a definitive mythos film. If this had been the first Lovecraftian story I’d ever read, I would have adored it – as I did Brian Lumley’s The Burrowers Beneath, back in my schooldays. As it is, I enjoyed it, but I’d hoped to enjoy it much more. Still, I’ve often found that horror stories continue to grow in my estimation long after I’ve read them, as the scariest parts fester, and that might well be the case here. The climactic scene in the Church of the First Word is magnificent, and the book is worth reading for that sequence alone.
Posted by Stephen Theaker