The Empathy Effect by Bob Lock, reviewed by Stephen Theaker 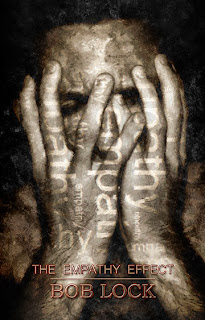 In The Empathy Effect (Screaming Dreams, pb, 144pp), Bob Lock introduces Cooper Jones. Named for his father’s profession, he’s a slightly psychic traffic warden. He can sense feelings, which comes in handy on the mean streets of Swansea: it may not stop him getting punched in the stomach, but on a good day it’ll give him time to clench. In this short comic novel he teams up with Albrecht von Wallenstein the Fourteenth (Alby for short), a testicular retriever who seems to share his special gift, to investigate the case of a missing girl.

Cooper’s not so much hardboiled as sunny side up. Throughout his narrative, cheesy dad jokes are the order of the day – for example, “she’s a redhead. No hair… just a red head” – rather than the usual bitter sardonicism of the private eye, try as he might to echo their style. Like his fictional peers, he does have a drinking problem and his relationship with the police is strained at best, here exacerbated by his lowly status as a traffic warden. He even incurs the requisite series of beatings during the investigation, but he takes all of this in surprisingly good heart. Even in victory, he literally holds out a hand to the worst of villains.

Although Cooper says early on that he regards his abilities as “a bloody curse”, the tortured image on the front cover doesn’t quite fit the content, which tends more to the charming and cosy. It becomes clear that Cooper’s biggest regret is not that he has this power, but that he didn’t start using it for good a bit sooner. The back cover, on the other hand, a photograph by the author of what looks like the steepest street in Britain, points up one of the novel’s strengths: its use of Swansea’s geography, in sequences like that in which Cooper and pursuing police officers struggle to stay upright while hurtling down such a street.

The novel begins excitingly in the present tense, throwing us into the ocean with Cooper, watching him drown while clingwrapped to a support leg of Mumbles Pier, before flashing back three days to the past tense. But it then drifts back to the present tense from time to time, and doesn’t return to the present tense once we catch up with the drowning sequence. In The Revenge of the Rose Moorcock uses bursts of present tense brilliantly to engage readers in the action; here it feels more like occasional inadvertence than a stylistic choice.

Similarly, though most of the book is in the first person, occasional shifts to the omniscient third – to keep an eye on the cartoonish villains – jar, as does the sexual aspect of one kidnapper’s motivation, which seems a little inappropriate for such light treatment. The book isn’t at its best when dealing with sex: it very nearly lost this reader with Cooper’s ungallant observation that a lady’s “collar and cuffs matched”. But those are all small problems with what’s generally a pleasant Sunday night drama of a book.

The Empathy Effect is unlikely to set your world alight, unless you’re an ITV executive looking for something to replace Kingdom – in which case, tiger, you just hit the jackpot. There’s clear potential in the character, but he needs a couple of things: a publisher who specialises in mysteries and thrillers and can pitch it at the right audience, and at least a hundred more pages to stretch his legs. The idea of a psychic traffic warden fighting crime with his canine frenemy is unusual and amusing, but the mysteries here weren’t quite substantial enough to do it justice.

After a bit of editing, this review appeared in Black Static #20, back in 2011.
Posted by Stephen Theaker