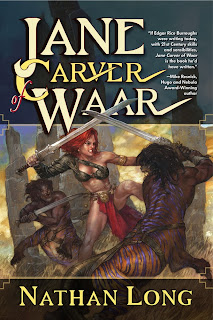 The heroine of Jane Carver of Waar by Nathan Long (Night Shade Books, pb, 312pp) begins her story not on the far-off Barsoomian world of the title, but here on earth, getting groped by an asshole in a Californian car park. She’s a tall, strong biker chick who trained in the Airborne Rangers, and so he’s soon dead, she’s soon on the run, and like John Carter before her she ends up in a cave whose contents transport her to another world. She was “just too fucking big for this world”, and that goes double on Waar, where she stands out like the redhead burning in the sun that she is. Despite the friends she wins with her bravery, kindness and sensitive bedroom advice, her loneliness drives her desire to get home. To do that she’ll have to help gorgeous, delicate Sai-Far, son of Shen-Far, Dhanan of Sensa.

His proud betrothed, the Aldhanshai Wen-Jhai, has been spirited away by Kedac-Zir, Kir-Dhanan of all Ora. Getting her back is not merely a matter of alerting the authorities, or even snatching her in secret: Sai-Far is honour-bound to challenge her abductor to a duel, and Wen-Jhai will be the first to despise him should he fail to do so. An early encounter with the Kir-Dhanan leaves Jane Carver with her own reasons to see him dead. That leaves one question to pursue Jane and Sai-Far through all their subsequent adventures, through airborne pirates, southern slavery and rooftop escapes: will she let Sai-Far have his shot at Kedac-Zir, and thus at honour and happiness, or will she kill the Kir-Dhanan herself for what he did to her? It’s all complicated by the fact that fighting Kedac-Zir will almost certainly mean the death – even if it’s an honourable death – of Sai-Far, and she’s becoming really fond of him, even if he isn’t her usual type.

Jane Carver is an interesting heroine, but readers who don’t find her appealing might not get far with the book since it’s all in the first person, supposedly transcribed – fruity language and all – by Nathan Long from fifteen tapes she recorded upon her return to our planet. As the book went on, I grew to like her very much. Her sense of honour, as revealed through her actions; her sensitivity to knowing she’s not on the romantic horizon of the man she’s protecting; her anger at the unfair social conditions on Waar; and her willingness to challenge the ideas of her friends: all round out the stereotypical biker we think we meet in the early pages. She’s not the only vivid character in the book. I became as fond as Jane was of pathetic Sai-Far, and even more so of his best friend and fellow princeling Lhan, whose shift from despondency to enthusiasm upon Sai-Far’s resolution to throw away his life was a highlight of the novel, as well as the perfect encapsulation of the alien society in which Jane has found herself.

At a glance this novel looks very much like a straightforward blend of Red Sonja and A Princess of Mars – a tall redhead motivated by a sexual assault fights her way across a far-off world where slightly odd-looking humans live alongside four-armed non-humanoids – and it would be daft to argue against that impression. From the title and the framing device onward this is a full-blooded homage to Edgar Rice Burroughs. But that’s not all there is to it, and readers will I think be surprised by the depth of characterisation, the interplay of societal mores, and how much you hope to hear Jane’s voice again once the novel is over. Plenty of scope for further adventures remains, and so one does hope that she found her way back to Waar, and that another box of tapes will find their way to Nathan Long. It would certainly be nice to read a novel where this big, strong, admirable woman didn’t get groped quite so much.

After a bit of editing, this review appeared in Interzone #240, back in 2012.
Posted by Stephen Theaker