Journey into Space: The World in Peril by Charles Chilton, reviewed by Stephen Theaker 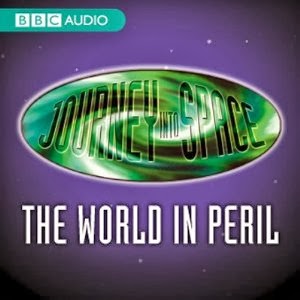 Journey into Space: The World in Peril (BBC Audio, digital audiobook, 10 hours; Audible purchase), written by Charles Chilton, is the third story in the saga of Jet Morgan and his crew, following on from Operation Luna and The Red Planet, both of which I adored. The CD release of this conclusion passed me by, so it was an utter delight to discover it on Audible.

The twenty-episode story begins with Jet (captain), Mitch (the engineer), Lemmy (the radio operator) and Doc (have a guess) arriving back on Earth after their disastrous Martian mission, with news of a possible Martian invasion. Put into seclusion to keep Martian agents from knowing they survived, and to prevent a panic, the boys kick their heels until a new mission comes their way: to go back to Mars. A fine reward!

Earth wants them to gather more information about the invasion, and, ideally, capture a Martian or one of the conditioned humans who serve them. The mission becomes urgent when strange planetoids appear in Earth’s orbit, and so after a brief sojourn on Luna while the ships are prepared it’s back to Mars for our heroes.

This is that rarest of treasures, the third in a trilogy that lives up to parts one and two. One of the true joys of Journey into Space is that it’s about characters who think very carefully. They chew everything over, consider every aspect and consequence of their decisions, argue intelligently with each other and their enemies, and are put into situations where careful thought is absolutely required and there’s plenty of time to do it. I envy the people who got to listen to this series when it first came out, though waiting a week between episodes must have been quite trying: every episode brings an exciting revelation, a brilliant set-piece or a deadly cliffhanger.

One particular tour de force is the episode in which, after an attack on Mars, Lemmy wakes up in absolute darkness, and must step by step work out where he is, why the ceiling is so low, why his feet can’t find any solid ground, if the rest of the crew are there too – and who the hell is that walking around the room with ice cold skin!

It’s hard to imagine I could have enjoyed this series more, but it does have one failing: the lack of female characters. That, the class relationships and the assumption that listeners will pay attention are the only things that date it. The journey into space is a very long one, but it’s highly rewarding, with an unexpected, perfect conclusion. Good work, Jet boy! (As Lemmy might say.)
Posted by Stephen Theaker