Doctor Who and the Pescatons by Victor Pemberton, reviewed by Stephen Theaker 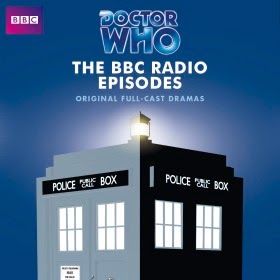 It has been quite a while since I last dipped into the six-story collection Doctor Who: The BBC Radio Episodes. I began with the Jon Pertwee story The Paradise of Death, reviewed in these pages many years ago, and it wasn’t too bad. A bit later I listened to The Ghosts of N-Space, which was so painfully awful I couldn’t bring myself to review it, especially since that was shortly after the deaths of Elisabeth Sladen and Nicholas Courtney and it wasn’t the right time to give their work a slating, however richly deserved. If you haven’t heard that story and you’re curious what was so bad about it, as an example let’s just say I never needed to hear the third Doctor explain the meaning of “sodomite” to Sarah Jane Smith.

Recently I’ve found that the new Audible iPad app is a very nice way to listen to audiobooks, and it’s kind enough to let you listen to non-Audible titles too, so I’ve been digitising and loading onto the iPad a lot of older audio adventures that got lost in the rush originally. Where those are ones I bought (for example the first eight in the Big Finish Companion Chronicles series, picked up in a sale), I may or may not review them, depending on whether I have time, but where (like this story) they were originally submitted for review and got stuck in the pile I will try to do the honours, though it’s a couple of years late. I don’t suppose anyone comes to this magazine/blog expecting timely reviews!

So, explanations aside, on to a short review of Doctor Who and the Pescatons (AudioGO, 1xCD, 46 mins; supplied by publisher), which was (the box says) originally broadcast on BBC Radio on 27 August 1993, but first existed as an LP in the seventies. This again features Elisabeth Sladen as Sarah Jane, this time paired with Tom Baker as the fourth Doctor, making this a rare example of a spin-off featuring the current on-screen cast. It’s really more of a story told by the Doctor than a drama. Sarah Jane’s contributions are very limited, and the only other speaking part is Zor (Bill Mitchell), the leader of the baddies who pops up for a couple of scenes. The script is by Victor Pemberton, who had previously written the seaweed serial “Fury from the Deep”.

The plot concerns, you won’t be surprised to learn, the Pescatons, who are a shark-like species of aliens who can walk around on land using their flippers. Though their invasion of Earth is motivated by the need to escape their own doomed planet, there are few shades of grey here: the Doctor says this is a clash between two civilisations, one good (by which I think he means us), one evil (probably the Pescatons). The invasion leads to some terrifying sequences where Pescatons wander round London eating people up. The screams are so full-blooded you worry for the sanity of any children who got their hands on the LP! But I wish I had.

Looked at objectively, this story isn’t terribly good, but it is a great deal of fun and a fascinating product of its time. Given its short length I’m sure this won’t be the last time I listen to it. It’s just a shame that there are no songs! A fan of Jeff Wayne’s War of the Worlds can’t help hearing the points in this story at which a disco beat might reasonably have kicked in, leading us off to new worlds of groovy Whovian fun. Justin Heywood singing for the Doctor, Sarah Brightman for Sarah Jane, David Essex for the Pescaton leader. It would have been glorious! But you can’t have everything. Someone should really get Tom Baker involved in a project like that: his brief contribution to Mansun’s Six shows how magnificent it could be.
Posted by Stephen Theaker