My Panasonic five-CD changer stereo is still going strong, though I don’t use it as much as I used to since getting an iPod. Some of my recent purchases are still in their shrinkwrap, thanks to Amazon auto-rip. I still love my stereo, though – there are times when the iPod is out of power, and I just want to set a few albums going with a single button press, and not have iTunes grinding away at my PC’s innards. Last week my iPod got into a muddle after I duplicated a playlist and it made all the music on the thing invisible. Needs a reset but I can’t be bothered. So back to the stereo, and that means a new blog post. Here’s what’s in those five slots right now. 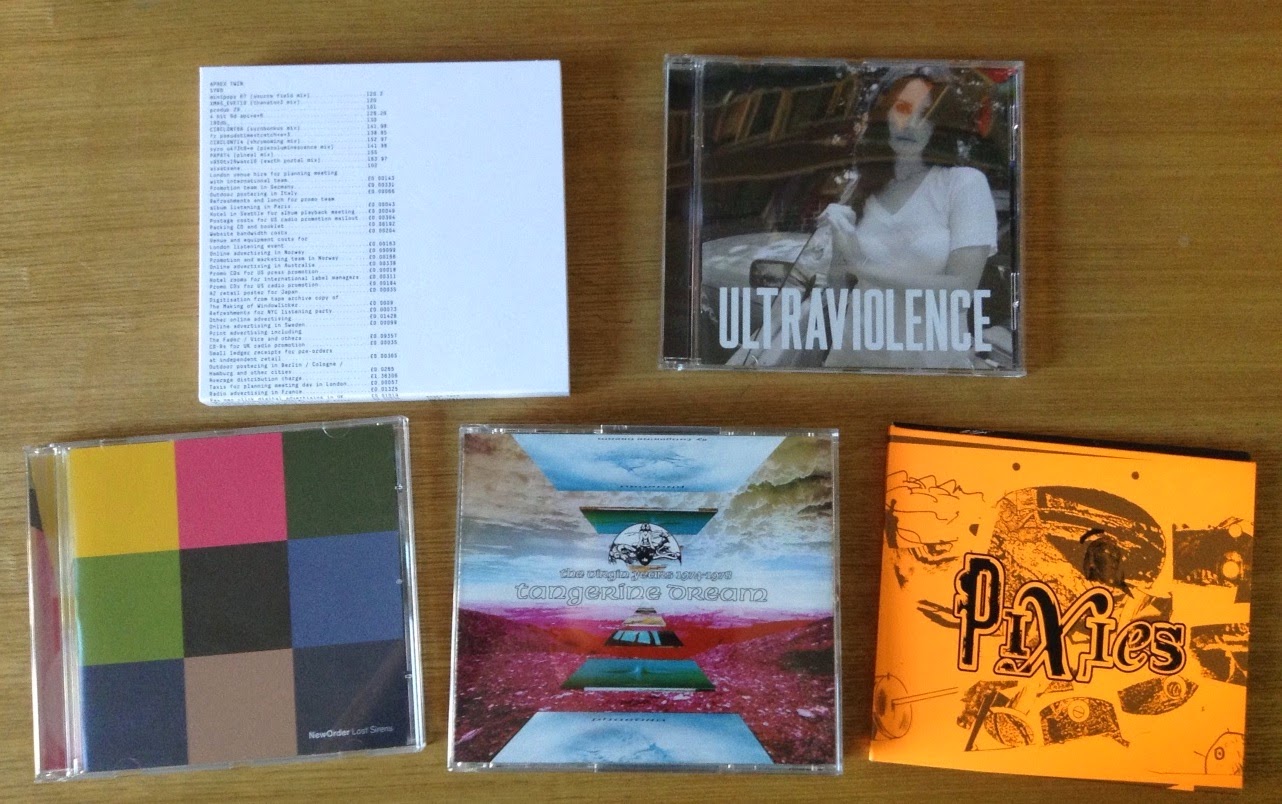 If you were to put an individual track on from this and ask me which Aphex Twin album it was from, I’d have no idea. But I’ve never listened to his music as albums, and I couldn’t tell you the names of more than half a dozen tracks. I just treat it all like one big album. Listening to this as a CD for the first time, it’s very similar to the Analord EPs I love so much: they’re pretty much my idea of perfect music. It’s what I imagined acid house would be like before I actually heard it. This won’t stay in my CD changer long, though, because of a bit of swearing. Tut, tut!

The same thing applies to this one: quite a few naughty words, so I can’t have it popping up in the rotation when the children are doing homework in my study! I only got interested in Lana Del Rey recently, I think because of all the chat about the possible return of Twin Peaks, and David Lynch seems to be a big influence on her music – it just clicked. The Lana Del Rey persona feels like she stepped out of a movie, or a novel, perhaps by Philip K. Dick. Maybe this will become a favourite album, even if it’s a bit too creepy for everyday listening, or maybe it’ll end up filed with the fads. (I can’t even imagine the thinking process that once led me to buy albums by Dido or Blink 182!) But right now I’m really into it. I love the wooziness, the character, the melancholy, the odd tempos and structures. Feels drunk and high, like an album made after most people are in bed. (That weird pattern on the CD in the photo seems to be the reflection of a bookcase.)

My first reaction to this – eight songs that were originally planned to form part of their next album proper – was that it’s woeful. The lyrics aren’t great (“You’re one of a kind, high on my agenda”). The music is a bit MOR. And I still think that, but it’s growing on me. I’ve caught myself singing bits of it while doing the dishes. And at eight songs it has as many tracks as some of their proper albums. I’m not one of those people who ever wishes their favourite artists would just stop releasing records. Even a sub-par album can produce a great track – I doubt I’ve listened to Get Ready more than a dozen times, but “Crystal” is one of my favourite songs ever. Tentatively looking forward to their next record – Hooky’s left, but Gillian will be back, and they said in Mojo a while back that they had been looking again at Power, Corruption and Lies, which is my favourite studio album of theirs. I liked them best when they were being weird and cool, the tracks that were about noises and moods rather than verses and choruses.

It was late at night, I had internet access because I had been doing an online thing for work, and I’d been listening to Phaedra by Tangerine Dream and been surprised by how good it was. I noticed two Tangerine Dream compilations on Amazon, The Virgin Years: 1974-1978 and The Virgin Years: 1977–1983, compressing all their albums from that time onto eight CDs, for about twenty quid in total. I’m a sucker for omnibus editions, so now I own far more Tangerine Dream albums than I really need to. Some of the later stuff sounds (at first listen, at least) to be abysmal, but this first CD is Phaedra plus side one of Rubycon, and it’s very good. I like space music. (And I reserve the right to change my mind about the later stuff once I’ve given it a better listen.)

One of only a handful of albums I’ve reviewed for our magazine, I like it no less now than when I wrote the review. Super stuff. Black Francis never stopped writing great songs, and I never stopped buying his records (Teenager of the Year, Fast Man Raider Man and The Golem are all excellent), but songs on albums like Bluefinger and Petit Fours felt like they had been written for the Pixies, and I’m so glad they finally got it together. Just wish it had come in a proper jewel case. And it feels odd that “What Goes Boom” is first on the album when it was last on the EP. How can it be both a final track and a first track? It boggles me.

I’m looking forward to the new album from Public Sector Broadcasting. The War Room EP was great, their album too, and I hoped they might one day apply their dialogue-sampling techniques to old science fiction films. They haven’t quite, but it’s close enough: their new album is about the real-life space race. I think that’s going to be a real treat. But will I be writing about it in the next Theaker’s Fab Five, whenever that may be? Will the five-CD stereo survive another year? Will I ever find anywhere to keep all these bloody CDs? There’s only one way to find out: keep reading our magnificent blog.
Posted by Stephen Theaker