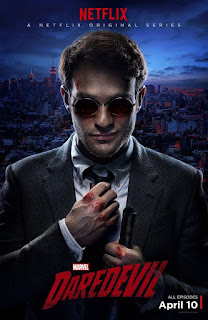 Matt Murdock is a blind lawyer affronted by the injustice he sees in his home of Hell’s Kitchen, a part of New York damaged badly in the battle between the Avengers and Loki’s army of alien invaders. Property developers are moving in, but some of the current inhabitants don’t want to move out, and that’s the kind of case that the newly established firm of Nelson and Murdock can be persuaded to take. What the two lawyers don’t know at first is that behind it all is a shadowy kingpin, who is bringing together Russian, Chinese and Japanese gangsters in one great criminal enterprise. Anyone who dares to utter his name – Wilson Fisk – is killed for their indiscretion, making it impossible to pin anything on him. It would be an impossible situation were it not for Matt’s unusual abilities. The chemicals that took his sight enhanced all his other senses – taste, touch, hearing and balance – and he was trained in combat, at least for a time, by the mysterious Stick. These skills let Matt fight for the city, at first in a black mask, and by the end of the series in the distinctive red suit of Marvel’s Daredevil.

This is an extremely violent series, much more so than Agents of SHIELD or Agent Carter, not suitable at all for children. Matt Murdock tends to get very badly wounded, since he’s often fighting against the odds. A fight in the second episode is the best I’ve ever seen on television, like looking down the classic corridor scene in Oldboy. Wilson Fisk is an utterly brutal villain, his fists the piledrivers they are in the comics, Vincent D’Onofrio’s performance so chilling, so physical and intense, that he’d have had awards nominations if this wasn’t a series about a superhero. (I hope we’ll see him face off against the Avengers or Spider-Man or Daredevil himself on the big screen at some point.) It draws on many periods of the comics, in particular those written by Frank Miller, Brian Michael Bendis and Mark Waid, to create a classic version of the character. The mood is dingy and grim, though Foggy brings just the right amount of humour to stop it getting too gruelling – and were those the stilts of Stilt-Man I saw in the background of one scene? Its pace is very much its own; this couldn’t be a network show, with the constant need to cue up adverts that has made programmes like The Big Bang Theory little more than a series of vignettes. The episodes stretch out fully over their running length, building up to moments of sudden, shocking violence. My only grumble is about the frequent discussions about the existence or not of god (Matt Murdock being a Catholic and Wilson Fisk an atheist), which seem bizarre given that the season’s plot follows on from a battle between Loki and Thor. Would people keep believing in other gods, or for that matter remain atheists, when real gods have been seen on television? Perhaps they would, but it makes Matt seem a bit daft. But that’s just a minor issue. I wouldn’t just rate this higher than the other Marvel television series, I’d rate it higher than most of the movies. And season two is going to feature the Punisher and Elektra! Let’s hope a change of showrunner doesn’t put a billy club in the works. Stephen Theaker ****
Posted by Stephen Theaker