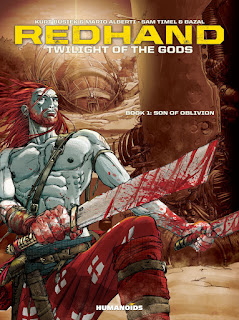 A party of highly religious, spear-carrying hunters stumble across a strange place while fleeing Kiotha slavers. It contains many dead bodies suspended in liquid within green tubes. But as the slavers attack, it turns out that one of the men in the tubes lives! He emerges naked, and fights mindlessly, but elegantly, like an automaton. Afterwards, his first words to the hunters become his name, because he doesn’t know who he is: “Red… hand…” Returning to their home, he faces the usual problems of the man with no name after the battle is done: hardly anyone wants him to stick around – except the pretty girl, and she has a jealous and angry admirer. This is a beautifully drawn graphic novel, every panel full of detail and interest. The story is one we’ve heard before, but it never gets old, and this version takes some surprising turns as it progresses. This should appeal greatly to anyone who yearns for new stories in the style of the early Elric books. Stephen Theaker ****
Posted by Stephen Theaker