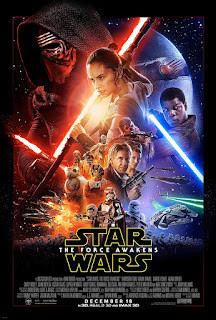 Star Wars Episode VII: The Force Awakens (if we may be allowed a scrolling preamble) has been released with considerable fanfare and after much anticipation. Like the birth of Prince George, Duke of Cambridge, its arrival brings together a nation of fans united in pride, patriotism, hope and nostalgia (and, be warned, young George, with a bevy of concealed weapons held at the ready). At last! A renewal of the franchise that blew up the box office in 1977 and grew quickly to become – for some people quite literally – a cinematic religion. But those who queue for midnight screenings do so with some trepidation. Given the false dawn of the prequelogy (Episodes I–III), will this merely be more of the tepid same? How will the new film tie in with the Expanded Star Wars Universe? Will the original characters return and stay true to memory three decades on? Will director J.J. Abrams bring with him an unconscionable crosspollination from the Star Trek franchise? In short, will Star Wars survive its metamorphosis to the post-Lucas era? The story continues…

If cinemagoers expected or feared change, their first impressions must have been reassuringly to the contrary. George Lucas may have been bought out by Disney but the men and women with mouse ears made certain to retain John Williams, whose magniloquent orchestral scores swept audiences away and complemented so well the epic scope of the original movies. Star Wars without John Williams would be like early PC games without MIDI-pop soundtracks, only louder in the absence. Thankfully, The Force Awakens features Williams in all his incomparable pomp and majesty, reprising earlier themes where appropriate and showcasing new compositions through which sizzling lifeblood Star Wars is enabled to soar anew.

Bringing back the (quote) good bits of Star Wars seems to have been a large part of J.J. Abrams’ modus operandi. This is evident not just in the score but in his favouring of scale models, location filming and practical effects over the glitzy do-anything wowbagging of CGI. George Lucas is said to have criticised the film’s retro tone – something he himself strove to avoid in the prequels, with lamentable consequence – yet by returning to the roots of what made the original trilogy great, Episode VII recaptures the sense of enormousness that Episode IV brought so singularly to the screen. For want of a better word, The Force Awakens makes Star Wars feel big again.

A New Hope dazzled in part by way of its originality, so recapturing its spirit would necessarily encompass a certain amount of modernising. This accounts for such curiosities in The Force Awakens as the mediaeval-styled light-longsword (verdict out; those handguards look likely to endanger the user) and a buzzing new piece of stormtrooper kit (in essence a riot stick energised for duelling against lightsabers). It also explains why droid favourite R2-D2 is side-lined in favour of the equally inspired BB-8 and why C-3PO is limited to one resplendent cameo. In a similar vein, Chewbacca and his bowcaster are depicted more powerfully, while the formerly disposable stormtroopers are transformed from candy-coated featherweights into genuine enforcers. In this instance, to Abrams’ great credit, the spirit of yesteryear’s Star Wars has been bolstered by a logic and gravitas A New Hope sometimes lacked.

Which brings us to the original cast [and hereafter, major spoilers].


Star Wars Episodes IV–VI were carried by relatively unknown actors (supported of course by industry doyens Alec Guinness and Peter Cushing). The main characters thus came without preloaded expectations; nothing to distract viewers from the unfolding story. This decision may have been financially motivated, at least for A New Hope, yet when Episodes I–III arrived and went largely in the other direction, the overabundance of acting talent served only to break the illusion and show up the shallowness of the scripts. With J.J. Abrams looking to the past, would The Force Awakens dust off Leia, Luke and Han or return instead to a more obscure cast…?

The answer is a little of both, but leaning very much in the right direction. We’re given John Boyega as stormtrooper deserter Finn (the naïve Luke figure); Daisy Ridley as self-reliant, tech-savvy scavenger Rey (a combination of Han and Leia); and Adam Driver as partially trained dark side Force warrior Kylo Ren (part Luke, part Vader wannabe). None of these are without standing in the industry, but they aren’t name actors. Unlike prequelogy stars Liam Neeson, Ewan McGregor, Natalie Portman, Samuel L. Jackson and Christopher Lee, their roles in Star Wars will likely define them.

The most heavily involved of the original cast, meanwhile, is Harrison Ford, who does just enough to bind old to new before [redacted]. Mark Hamill makes no showing until the very end, Abrams having foreseen the possibility of his taking over the story (or, the unkind might say, sinking the boat; even without dialogue Hamill’s lack of acting prowess is a hole in the making). Carrie Fisher is situated very much on the periphery of events and seems unlikely to feature much in Episodes VIII and IX. All three actors have aged – or to be less facile, haven’t been digitally youthened – and a shirty minority of viewers have leapt from this starting point to the conclusion that Fisher, in particular, hasn’t aged well. What nonsense. It’s been thirty-three years since Return of the Jedi! One wonders if such puerile fantasists still conceptualise Jane Fonda in her Barbarella getup, or Raquel Welsh unchanged since Fantastic Voyage and One Million Years B.C.? Said viewers might do well to look in the mirror at some point.

Whatever may have been hoped from the original stars in reprise, it seems fair to say (and fingers crossed here that Hamill remains a MacGuffin) that Abrams has used them astutely to usher in a new trilogy where their services are no longer required. With the Disney enterprise now in some measure legitimised, it’s time for Star Wars to move on. Certainly this is the case regarding plot, where Abrams and Lawrence Kasdan (co-writer of The Empire Strikes Back and Return of the Jedi) have retrofitted their screenplay to the point of making it virtually the new New Hope. Yes, they’ve given it some innovative touches – and Kylo Ren’s character is an intriguing inversion of what came before – but rightly or wrongly they’ve spurned the Expanded Universe, while much of what appears on screen is rehashed shamelessly from Episode IV. (And not always to as good effect; evidence: the First Order’s overplayed Nazi parade and its ostensibly awesome Starkiller, which ramps up the Death Star concept yet lacks a defining emotive response such as Leia’s when Alderaan is destroyed.) This isn’t to say the plot is bad or that the new trilogy won’t now shoot off in fantastic new directions, but for the time being it seems uncannily as though the Force has awakened on Groundhog Day.

Episode VII is by nature incomplete; unlike A New Hope, which had to stand alone, it has been written overtly as the start of a trilogy. Spiritually as well as narratively, however, it comes very much from the mould of Episode IV: a space opera with uncommon substance; a human story unfolding on a grand alien stage; a serious adventure underscored, not undermined, by its humour. Naturally, it isn’t perfect – alas, poor Chewie, sent into a berserker rage by [redacted], only minutes later to reappear with a smile at the controls of the Millennium Falcon and then stand over with the extras while newcomer Rey shares a hug with Leia – but that was never the hope or expectation. All that fans really wanted was to watch the films in story order and still feel buoyed at the conclusion, not suffer through them in production order, becoming increasingly miffed. To that end it is fingers crossed for the new Star Wars; so far so good and—

1977 no longer seems quite such a long time ago. Jacob Edwards
Posted by Stephen Theaker