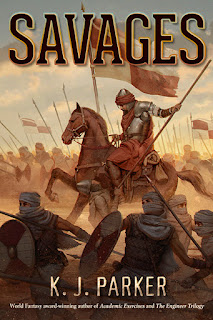 “The end of the world began with a goat…”

Savages, for want of better terminology, is a down-to-earth epic historical fantasy wherein a once-mighty empire hangs in the balance, its waning existence threatened by not-so-proverbial (in fact, ever-so-practical) barbarians at the gate. K.J. Parker threads together several storylines in exploring this scenario, primary of which are those of Raffen, a chieftain whose loss of identity affords him freedom to turn his hand to any craft; Calojan, an imperial general with a self-fulfilling reputation for invincibility; and Aimeric, a pacifist turned arms-maker and politician, upon whose wiles may rest not only the future of the city but also a watertight case for prosecution by cosmic irony. Parker avoids playing favourites, and so each player holds the reader’s sympathies in conjunction with the spotlight, this perspective switching subtly whenever one is placed in opposition to another. Such protagonistic ambiguity – a load-bearing device that feeds credence back into the narrative mechanism – is a feature of Parker’s novels, and allows the possible storylines to unfold without prejudice. Whatever happens will happen.

In truth, the course of any great event – even such that is studied for centuries afterward and which cruels the future for whole swathes of the population – is shaped not only by the actions of a select few but also by the blind impetus of the many, not to mention fickle and incalculable pieces of happenstance. Evidently, Parker is aware of such nuances and has tasked herself with turning up the specific nail in want of which the battle was lost (while furthermore digging deeper to the botched trade agreement behind the cranberry shortage from which sickened the child of the farrier who failed then properly to shoe the horse in question). That she can do this without losing the story’s thread – that her eye for the minutiae presents as a blessing, not a curse – speaks wonders for her authorial craftsmanship.

Far beyond any non-fantasy setting, K.J. Parker’s invented worlds are rendered with a faithful eye to the details of real life, their depiction easily outshining those primary accounts of Plutarch, Pliny, Polybius and the like. Whereas other writers – be they concerned with fact or fiction – tend overly to focus on one particular agenda, Parker clearly partakes of a fascination for the practicalities of history, and so concocts for us political intrigue and military operations that remain bound by societal, religious and economic constraints, written not just from the perspective of those who ruled or prevailed but rather from the varying points of view of everyone involved. We have in evidence moth-eaten shades of Rome (in decline), a sombre nod (and a wink) to Hannibal, horn-blown echoes of Alexander (a goat herder made good), and a veritable potpourri of lesser-known archetypes all adding their pungence to the sensory mix and bringing to life a tale well-grounded in history’s truths.

So with such fare on offer, what need now could we have of Appian or Arrian, Tacitus or Thucydides? Why ever would we keep doting on Herodotus, swatting up on Suetonius or paying even lip service to Livy? Why indeed. When K.J. Parker came into being – the dark alter ego of comedic novelist and erstwhile classical scholar Tom Holt – thousands of ancient historians must have thrown their copies of The History of the Decline and Fall of the Roman Empire into the air and started dancing the Funky Gibbon (volume after volume) in rapturous peer review. Holt’s Parker persona is at once worldly and learned, curious yet cynical, from which outlook Savages emerges as a sardonic, slow-burning delight: an immersive page-turner wherein magic plays no part, the fate of empires turns on the veracity (or otherwise) of human endeavour and Parker sets a new high-water mark for authenticity in historical fantasy. Jacob Edwards
Posted by Stephen Theaker