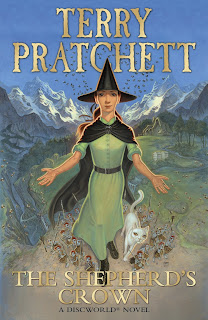 Terry Pratchett – author and humorist; a writer of such immense popularity, his books for many years topped Britain’s most-stolen tally; the man who armed Death with laconic wit and a scythe and made him a recurring character – is dead. This of course was inevitable. THERE CAN BE NO EXCEPTIONS. But for all that Pratchett’s passing will leave a vacuum to be filled in the New York Times bestseller lists and the reading lives of millions of devoted followers, let us not mourn overmuch; rather, we should cherish the years he gave us and scrump one last time from the verdant pages of a new Discworld novel: a gentle, bittersweet celebration.

Published posthumously, The Shepherd’s Crown forms a fitting curtain call, not least of all because it commences – not ends, mind you – with the death of Granny Weatherwax, a founding figure in Pratchett’s development of the Discworld and a personage whose absence is felt markedly by all around her. If not a knowing postscript (Pratchett never stopped writing and had ideas slowly coalescing into several more novels), having the mantle of head witch pass from Granny Weatherwax to Pratchett’s young-adult protagonist Tiffany Aching at very least seems an apposite way to have signed off. Terry Pratchett gave us wizards and watchmen and a weird and wonderful world ever growing with its readers. One might suspect, however, that he always held a soft spot for the witches first introduced in Equal Rites (1987), and increasingly in later years for Aching, a hard-working wunderkind who perhaps more than anyone embodied the magic to be found in common sense.

One hallmark of Terry Pratchett’s writing is that he was ever inclusive, never patronising. Hence, when the age of his central character denoted young adult fiction, he made no change to his narrative voice – if anything, he tackled slightly more adult themes – and when he structured a mystery, one always had the impression he was feeling his own way through it as well, not merely stringing the reader along. It is appropriate, then, that in a postscript to this last book, Rob Wilkins (Pratchett’s assistant) openly acknowledges that The Shepherd’s Crown was at the time of Pratchett’s death still a work in progress. Pratchett, it transpires, would first fashion the bones and then flesh out each story, and this explains why The Shepherd’s Crown, somewhat thinner than others of Pratchett’s works, feels ever-so-vaguely unfinished… but only in the middle! The tale is told, yet we remain witness to the interrupted sparkle of a magic at play. Again, this seems apt.

Terry Pratchett wrote comedic fantasy where much of the humour derived from observations of the everyday and from inviting his audience to recognise their own lives in amongst the Discworld’s heady mix. Thus, just as Tiffany Aching finds strength in being grounded to the well-trodden soil of the Chalk, so too do Pratchett’s books offer strength through their grounding in truth. The result is dreamy escapism mixed with a pragmatist’s droll mirth: uniquely compelling and poignant – enchanted as much as enchanting – and with the power to assimilate both death and Death alike and reconcile them with life. Thank you, Terry, for sharing your gift these many years. Jacob Edwards
Posted by Stephen Theaker