The Red Seas, Book One: Under the Banner of King Death: The Complete Digital Edition, by Ian Edginton and Steve Yeowell (Rebellion) | review 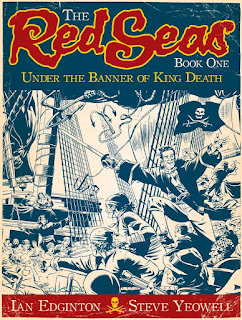 Captain Jack Dancer got his ship by leading a mutiny, outraged by the mistreatment of the crew. Now he leads them to adventure on the high seas. They are treated a bit better, but their chances of survival haven’t improved. This book collects three of their adventures. In the first they must do battle with Dr Orlando Doyle, a hollow man with a crew of the dead. In the second they meet Aladdin, in search of Laputa and still giving orders to his genie, and in the third they travel deep within the earth, where a beautiful empress rules a race of lizard men. Three other stories feature people met by Jack Dancer on his travels: Sir Isaac Newton (his life secretly extended by the Brotherhood) fights a British war criminal possessed by an ancient Roman demigod; the two-headed dog Erebus (having left one head at home) and a friend hunt hidden treasures in blitz-torn London; and the regulars of Jack’s favourite watering hole must deal with a fellow who is “much more than a man… and a little less than God”. It’s three hundred and seventy pages of unapologetic adventure, made all the more satisfying by being drawn in its black-and-white entirety by Steve Yeowell. (I still remember how disappointed I was when I realised he wouldn’t be illustrating the whole of The Invisibles.) The stories were originally serialised in brief episodes in 2000 AD, but apart from Isaac Newton’s werewolf fight (which features little diary recaps) they are seamless, each of the three main stories reading like a short graphic novel. It’s a digital-only collection, so look out for it in the 2000 AD app and places like that. Stephen Theaker ***
Posted by Stephen Theaker