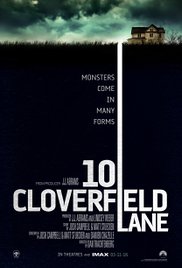 The mind-numbing sameness of many films has trained viewers to expect a narrow list of possibilities as a story unfolds… either this will happen or that will happen… character x is either all this or all that. 10 Cloverfield Lane, directed by Dan Trachtenberg and based loosely on the alien attack extravaganza Cloverfield (2008), plays upon this tendency to pigeonhole outcomes and characters. Set mostly in a bunker beneath a Louisiana farm, the film serves up a potent “he’s coming/who’s out there?” tension gumbo whose ingredients range from bold (and sometimes shocking) actions to more ordinary, yet still highly charged situations.

Aspiring fashion designer Michelle, whose marriage is on the rocks, crashes her car, then wakes up chained to a wall in a kind of cell. Her warden Howard claims that “there’s been an attack” and that he’s brought her down into his bunker to save her from contaminated air. Michelle then meets farmhand and fellow bunker guest Emmett, who says that Howard also “saved” him from the event. Ex-Navy man Howard gives Michelle a tour of the space that will indefinitely serve as the trio’s living quarters.

So begins a play-like film that tangles the viewer in a world of uncertainty controlled by an eccentric doomsday enthusiast (Howard). Michelle, uncertain of her keeper’s trustworthiness, enlists Emmett. They gradually uncover more about Howard’s mysterious (and absent) daughter Megan while Howard goes to greater lengths to preserve his domain and manage his tenants.

Goodman Leads Great Cast
Interstellar travel and exotic planets dominate the contemporary sci-fi film landscape. 10 Cloverfield Lane stands apart by confining its activities to a small set with a bare bones cast of primary characters, all of whom perform superbly.

Mary Elizabeth Winstead’s Michelle is a pragmatic young lady: she can devise makeshift weapons and manipulate conversations. Emmett, played by John Gallagher, Jr, serves as a kind of intermediary between Michelle and Howard. Though he first presents as somewhat dim-witted, Emmett quickly proves to be a more thoughtful individual. In one scene, Michelle and Emmett each share a regret story that reveals more about them. By the film’s end, both will have an opportunity for redemption.

The most compelling character of 10 Cloverfield Lane is John Goodman’s Howard. From the moment that Howard roughly opens the door and clomps into Michelle’s cell, Goodman captivates. You never know what he’s going to say or do. He is a commanding figure with little tolerance for horseplay.

Goodman is at his best in scenarios that would typically be seen as ordinary or even banal… eating dinner or playing a game, for instance. When the trio plays a guessing game, Emmett points at Michelle and says, “Michelle is a…” Howard repeats “girl” and grows frustrated as he is unable to come up with the word “woman”. In the end, the best Howard can do is “princess”. Howard’s inability to conceive of Michelle as a woman shows his desire to be a father figure. This fits with the territoriality he expresses toward Michelle throughout the film, such as when he brings her ice cream or chides Emmett (“No touching!”) for grabbing Michelle’s arm while she stumbles.

A Study in Ambivalence
What makes 10 Cloverfield Lane such an effective film is its reliance on the viewer’s uncertainty. It starts with the trailer: Tommy James and the Shondells’ upbeat “I Think We’re Alone Now” accompanies warm and fuzzy scenes like Howard bobbing before his jukebox and the trio playing games. You’d think this was a resurrection of Goodman’s Dan Conner from the nineties sitcom Roseanne.

But as the trailer and the film prove, 10 Cloverfield Lane is far from the Chicago suburbs where Roseanne was set and Howard is nothing like Dan Conner. Howard is not gregarious. He is controlling. He is short-tempered. He is utterly devoid of a sense of humor. Still, we can’t help but wonder: is Howard, despite his oddities, correct in his assertions? The questions build: Is Howard lying? Is he crazy? Is the air contaminated? Are we “alone now?” One isn’t even certain that Emmett can be trusted.

Then there are the bigger concerns: Will Michelle get out? And what happens if she does?

The tenuous connection to the film Cloverfield is another master stroke of ambiguity. For instance, the occasional rumblings the group hears above the bunker could be aliens (like Cloverfield), or they could be a misdirection… cars, helicopters, maybe even something that Howard manufactured.

Strange Creatures
To see 10 Cloverfield Lane in a theatre or even in a dark room is to descend alongside Michelle into Howard’s shelter. During your journey, you’ll crawl through confined spaces, and you’ll participate in escape attempts both subtle and blatant.

“People are strange creatures,” says Howard. “You can’t always convince them that safety is in their best interest.” On Howard’s turf, you can never be safe in your assumptions about just what is going on.

Can this film, which boldly refuses to conform to Hollywood tropes, even be classified as sci-fi? There’s only one place to go to find out: 10 Cloverfield Lane. - Douglas J. Ogurek *****
Posted by Douglas J. Ogurek