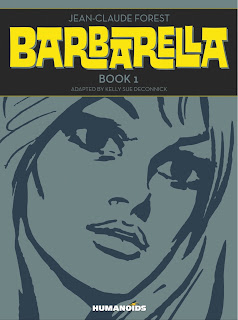 I’m always amazed at how little I like the film Barbarella, given how much I generally adore that kind of sci-fi from the sixties and seventies. I think the problem is just that it’s dull. This is not a charge you could level at the original comic book, presented here in a new English-language adaptation by Kelly Sue DeConnick of Captain Marvel fame. It’s too random and fast-moving to be dull, bouncing from one over-the-top scenario to another like a hyperactive moon-man. Barbarella is a space traveller whose tried and trusted approach to danger is to take off all her clothes, though to be fair that usually works out for her, and she’s uncynical about using her charms that way. She’s spaced-out, disengaged, lusty, bisexual, and looks a lot like Brigitte Bardot. Her adventures in this first book include encounters with flower growers under siege, a face-thief, a hunter and the scientist who creates monsters for him to fight, the Princesses of Yesteryear and my personal greatest fear, flying sharks! At its best it reminds me of our own much-missed Newton Braddell, and even at its worst it’s enjoyable. Despite the sauciness, it doesn’t feel adult in tone. In art and narrative style it reminds me rather of the lightweight, sketchy stories that would appear in children’s annuals from the sixties, like those for Doctor Who and Bleep and Booster, just with rather saltier content in places. It ends very abruptly, but that feels okay. It’s not the greatest comic you’ll ever read. I do think it’s worth reading. Stephen Theaker ***
Posted by Stephen Theaker