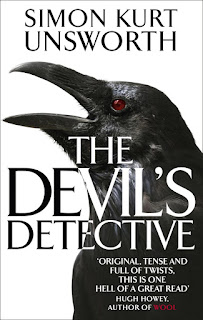 Back in issue twenty-four, I reviewed Mark Valentine’s The Black Veil and Other Tales of Supernatural Sleuths (2008), an anthology that has since come to define the specific area of overlap between crime fiction and speculative fiction known as either the supernatural sleuth or the occult detective. In his introduction, Valentine explains how the magazine contributors of the late nineteenth century began to explore different ways in which the relatively new and incredibly popular figure of the private detective could be merged with the much older but still entertaining milieu of the ghost story. This combination of detective protagonist and ghostly setting saw the initial blossoming of the subgenre, which included such greats as Arthur Machen’s Mr Dyson, Robert Eustace and L.T. Meade’s John Bell, E. and H. Heron’s Flaxman Low (the Herons were actually the Prichards, a mother and son team), Algernon Blackwood’s Dr John Silence, and William Hope Hodgson’s Carnacki.

The particular and peculiar mix of genres embodied by the occult detective made the transition from short stories to television in the second half of the twentieth century with Adam Adamant Lives! (1966–1967), Randall and Hopkirk (Deceased) (1969–1971, remade in 2000–2001), and Kolchak: The Night Stalker (1974–1975, remade in 2005). The recent revival of the subgenre was perhaps most firmly established with The X-Files (1993–2002), the tenth season of which was released earlier this year, coinciding with both the fifth season of Grimm and the third season of Penny Dreadful. The graphic novel has been especially influential in maintaining the public’s interest, with two particularly long-running series standing out, Hellblazer (beginning in 1988) and Hellboy (beginning in 1993). Strangely, there has been less of an interest in the occult detective in mainstream novels, although three long-running series characters have emerged. Jim Butcher’s Harry Dresden was introduced in 2000 and the fifteenth Dresden File was published in 2014. John Connolly’s Charlie Parker was introduced in 1999 and his fourteenth case was published this year – although I have reservations as to whether Parker can accurately be called an occult detective (see my review of his thirteenth case, A Song of Shadows, in this issue). Phil Rickman’s Merrily Watkins series began in 1998, with her thirteenth investigation published at the end of last year. The popularity of the occult detective is further evinced by the many failed and few successful attempts to combine Sherlock Holmes and the Cthulhu Mythos and the fact that a large minority – if not the majority – of new Holmes stories are works of speculative fiction rather than crime fiction.

One of the reasons for this popularity is that the subgenre has the potential to literally offer the best of both worlds, combining the cognitive demands of a clever mystery with the emotive atmosphere of a frightful horror story. What distinguishes the occult detective story from the crime fiction subgenre of the psychological thriller – the work of, for example, Thomas Harris, Mo Hayder, and Steve Mosby – is that there is at least the possibility of a genuine supernatural element. In the short story form, this introduces an extra element of suspense in that some cases have natural solutions and others supernatural solutions and Hodgson exploited this duality brilliantly with Carnacki (albeit briefly, courtesy of his death on the Western Front in 1918). The essence of the occult detective story is a mystery that must be solved by means mundane or magical in a setting that is either real or fantastic, with all possible permutations of this basic formula permitted. Whichever option the author selects, he or she faces the tricky task of relatively quickly establishing the internal logic of the almost-real or unreal world in order that the reader can play the mystery game, which is usually the game of working out who the killer is.

Simon Kurt Unsworth has opted for a fantasy world, a post-Paradise Lost Hell where there is a truce between God and Satan, and his detective is Thomas Fool, one of Hell’s three Information Men (one of whom is a woman). The Information Men are the only police in Hell and no more than three are required because their job is simply to record demonic crimes against humanity rather than investigate them. The Devil’s Detective (368pp, £5.99) begins with Fool on escort duty, responsible for the safety of a delegation from Heaven which is negotiating with the (Infernal) Bureaucracy for human souls. My sole criticism of the work is that its thematic content remains opaque throughout. What, I wondered – and still do – is really driving the plot forward? There are several fascinating options: the world-mapping of a new Hell where humans serve demons for all eternity in an amicable equilibrium with Heaven; the solution to the mystery of the murder of a human prostitute in this occult setting; a morality tale describing a Hell that is characterised by the absence of free will for its human occupants; or an allegory that is either pro- or anti-religion describing how human beings have already built Hell on Earth or how ridiculous the conception of an afterlife is. All of these disparate strands run through the narrative, though there is little to unify them.

Aside from the ingenuity of the setting and the way in which the rules of the mystery game played in Hell are established without resorting to lengthy swathes of exposition, the quality of Unsworth’s writing reaches outstanding heights at times. An example is the death of one of the main characters, who is accosted by a group of minor antagonists that gradually becomes more and more dangerous until one suddenly realises that he (or she, I’ll avoid spoilers) is in mortal danger. The brilliance of this particular piece is in the way in which Unsworth somehow manages to combine the pace and tension of the thriller with the slow-building apprehension of horror and he is both competent and comfortable with a foot in each genre. Ultimately, and this is why Fool is such a fine example of the occult detective, the novel works well as a traditional murder mystery because there are just enough clues for the reader to realise that he or she could have worked out the solution had they paid more attention to detail as well as the link between plot and subplot that is de rigueur.

Returning to my criticism about thematic content, the question I wanted answered was not the identity of what soon emerges as a serial killer in Hell, but the whereabouts of Satan. What, post-war, is he up to? There is a suggestion that he has retired to Crow Heights, a kind of gated community where the ancient and powerful have locked themselves away, but the truth is more interesting and – along with the final twist of the narrative – sets up a fascinating milieu for the rest of the series. The Old Hell was fire and brimstone, the New Hell was chaos and uncertainty for its human citizenry, but following Fool’s interest in actually solving crimes, the Hell of the future is a Hell with a completely powerful and entirely unaccountable police force. The mysteries of this forthcoming Hell will be revealed in The Devil’s Evidence, due for publication in October.
Posted by Stephen Theaker