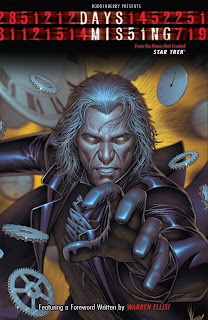 The Steward is a white-haired guy who fights like Neo and (theoretically) exists outside of time in a colossal library, watching our world go by. When a particularly disastrous day comes around, he steps in, to inspire people, to fight them, to cover up his own existence, and presumably sometimes just to relieve the boredom of spending eternity on his own. If he can fix things before the day is done, smashing, but more often he has to rewind time by twenty-four hours and reshape events. It’s as if Bill Murray in Groundhog Day learnt to activate his time-looping ability on demand. The day lost in the loop may echo in the feelings and dreams of those that live on – for example, Mary Shelley in one story, whose encounter with a reanimated corpse inspires Frankenstein – but otherwise the only record of that lost day is in the books that line the Steward’s library. He was alive before humanity existed, and seems likely to long outlive us, but he’ll do his best to keep us going. Do you have any idea how long he spent trying to talk to dinosaurs before we came along?

This is a slightly odd book, that feels like it is intended as a sales document for a television format as much as a comic: the rather foggy premise (which I didn’t understand until it was all set out very clearly in the last issue) was cooked up by Roddenberry – not Gene Roddenberry, but Roddenberry the company, run by Gene’s son and his friend Trevor, who have then pulled in a variety of creators to produce the individual stories, much like writers and directors coming in to produce individual episodes of a television show. Once I realised that, I expected it to be poor, and yet it ends up being fairly decent. The hired guns include people like Phil Hester, Frazer Irving, Dale Keown and Ian Edgington, and the stories they produce range from the okay to the actually pretty good. The best comes last, with the Steward stepping in to rewind time nine times over when an accidentally-created artificial intelligence makes plans to devour the planet. It’s rather chilling when he tells the laboratory staff how long it usually takes each of them to give in to madness, and Frazer Irving’s artwork really sells it. Other stories feature conquistadors, the Large Hadron Collider and an outbreak of ebola. Worth a read if it comes your way, but don’t seek it out unless the premise particularly appeals. ***
Posted by Stephen Theaker