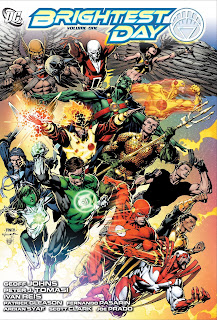 At the conclusion of the Blackest Night, where Black Lanterns had laid siege to Earth, several dead heroes and villains were brought back to life by a blinding white light. Among them were Hawkman and Hawkwoman, Hawk (of Hawk and Dove), Aquaman, Martian Manhunter, Captain Boomerang, the Reverse Flash, Osiris, Jade (the original Green Lantern’s daughter), Firestorm and Maxwell Lord, the psychic who once brought together the Justice League International. It also brought back one character who had been dead since his debut, Deadman, who will presumably need to change his name now. This book follows them all as they adjust to being back in the world, and in the case of Hawkman and Hawkwoman, out of it in what seems to be another dimension. I’m not a particularly huge fan of any of these characters, and I wasn’t even aware that half of them were dead, so their return to life didn’t get me all that excited, but it was very good fun to read a DC comic that followed a bunch of characters in its universe without jamming them together into an ad hoc group. It’s a network drama of the DC universe, letting their stories unfold and bringing other guest stars in as the story demands it. There’s a connection, the light that brought them back having coalesced into a white lantern, which sends Deadman off to check in on each of the others, but each storyline gets its own room to breathe. The art does its job well. It’s very gory at times, with people being stabbed and skinned, and one incident (on a ship) is very unpleasant in a different way (even if Aquaman and Mera do come to the rescue), so this isn’t a book for children. People who have read quite a lot of DC comics are likely to get the most out of it. Stephen Theaker ***
Posted by Stephen Theaker