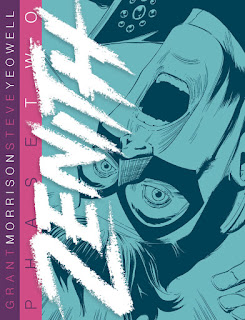 Zenith’s parents were a couple of superheroes, White Heat and Doctor Beat, murdered in the late sixties. In 1983 he revealed himself to the public, and after becoming popular in the tabloids “he did what all the soap stars and the page three girls were doing”. He released a pop record, and then some more, his soaraway success only interrupted by the re-emergence in the previous book of a mad Nazi super-villain. This volume, collecting stories from 2000AD Progs 589 to 606 and a winter special from 1988, shows us a Zenith who has grown up an infinitesimal amount. He still doesn’t want to miss Neighbours, he’s obsessed with Beatrice Dalle, and he’ll hook up with women two at a time in the most dangerous of situations, but he doesn’t need all that much convincing to tag along with a CIA operative on her investigation of a Richard Branson type in his mysterious Scottish headquarters. She promises he’ll learn something about his family there, and by gum he does. It’s great to finally read one of the lost touchstones of 1980s comics. While V for Vendetta and The Dark Knight Returns are by now in their three millionth and one print runs, this one was unavailable for a fair old while. It’s classic Grant Morrison, its edges overlapping with so much he’s done since, from Doom Patrol to The Invisibles to Batman, with its shadowy manipulators, interdimensional invaders and pop culture heroics. Comparing Steve Yeowell’s art to that in The Crimson Seas, I can see that it’s improved over time and become more consistent, but I love it here just as much. Essential reading. ****
Posted by Stephen Theaker