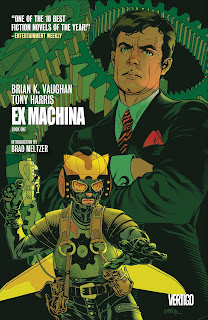 The mayor of New York isn’t a Republican or a Democrat. He was a superhero, and before that an engineer, sent to investigate something weird and green glowing underneath the Brooklyn Bridge. Whatever it was blew up in his face, and he gained the ability to talk to machines and (perhaps more usefully, since we can all do that) have them follow his instructions. He grew up reading Justice League of America comics, so naturally, with the addition of a rocket pack, helmet and alien blaster, he became the Great Machine. It didn’t go very well, and after his secret identity was blown he decided to run for mayor, to put himself in a position where he could effect real change. He won, though not for reasons he would ever have wanted, and now he’s trying to run a city where psychos want to kill him, the commissioner of police and the state governor both hate him, and a publicly-subsidised gallery is about to display a painting of Abraham Lincoln with a racist word scrawled across his chest. His powers are only going to help with some of those problems. This 273pp book collects the first eleven issues of the original comic, and it got off to a terrifically confident start. The narrative bounces around the mayor’s timeline without ever confusing, and mixes ongoing plots with shorter self-contained stories with an apparent ease that must have required a good deal of work. The artwork is striking and unusual, looking almost as if photographs of actors have been rotoscoped to produce it. However it was produced, the result can be peculiar, but only because it has led to such a surprisingly varied range of expressions, faces and poses. I’d read parts of this book before, out of order, borrowed from the library, but it’s a real treat to start from the beginning, knowing I have books two to five waiting to be read in my Comixology library. The entire set cost me just £15 in a sale. I won’t often get the chance to spend my money more wisely. ****
Posted by Stephen Theaker