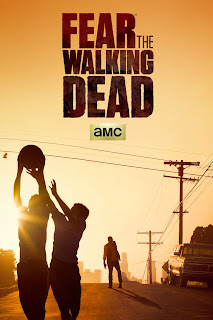 Travis Manawa (played by Cliff Curtis) and Madison Clark (Kim Dickens) are a married couple trying without much luck to blend a family. He is divorced, she is a widow. Travis has a son who lives with his ex and doesn’t want to see him at the weekends, Madison has a son, Nicky, who loves heroin and a daughter, Alicia, who hates long trousers. When Nicky wakes up in a drug den to find his girlfriend eating someone’s face, he thinks he’s gone mad, and so does his family, but it won’t be long before everyone is caught up in that madness. When a riot breaks out in the city centre, Travis and his son take refuge in a hairdressers with a family of three, emigrants from El Salvador, not realising that from now on, all refuge will be temporary.

American television has a lamentable tendency to suck the vitality out of any successful television programme by creating licensed rip-offs and copycats. For every worthwhile Xena or Angel there are a dozen NCISes: LA or CSIs: New York that overstretch the premise or divide the writing staff. Fear the Walking Dead spins out of a programme that itself has sometimes been spread a little thin, despite its quality, having to ration the appearances of some cast members. But this spin-off has one big selling point: where the usual colonates just show us slightly different people doing a slightly different job under a slightly different colour filter, Fear the Walking Dead can show us a crucial part of its parent’s story, one that viewers missed while Rick Grimes was sleeping in hospital: how the apocalypse went down. Part of the reason we didn’t see that before was that it had been shown in so many films, so why repeat it? Get to the stuff we don’t know! But that world means more to us now. We know how bad it is going to get for these people, we shout at the screen as they waste batteries, and cringe at their pitifully small fences!

As slowly becomes clear, there is another difference: while the characters on The Walking Dead have generally made the right decisions, have usually been the good guys, these people aren’t. They aren’t the kind of people who think to close the door behind them after they escape a zombie hideout, not all of them would rush out to warn people in danger, and some of them don’t care about the consequences of their actions at all. This first season is only six episodes long, and while the first couple are more about junkies and family drama than the undead, it gets better as it goes on, and from the beginning it has a undeniable heft, borrowed from its parent show, admittedly, but very real nevertheless. It doesn’t yet have a central performance to match Andrew Lincoln’s in The Walking Dead, but neither do any other programmes, and these characters haven’t yet been stripped so raw as Rick Grimes. It will come. ***
Posted by Stephen Theaker