A Song of Shadows, by John Connolly (Hodder & Stoughton) | review by Rafe McGregor 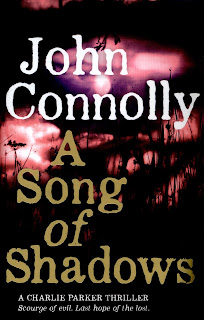 A Song of Shadows (464pp, £3.85) is the thirteenth “Charlie Parker thriller”, as the series is described by Hodder & Stoughton, first published in hardback in 2015. First and foremost – and quite possibly because of rather than in spite of the criticisms I shall make – the series is extremely successful, regularly ranking high on various bestseller lists and regularly receiving rave ratings from the most trusted crime fiction reviewers. I must confess to not having read all of Parker’s cases, which began with Every Dead Thing in 1999 (and was, as an example of my previous claim, the L.A. Times Book of the Year), but I have read the first two and most recent two and can confirm that there has been no fluctuation in quality. Connolly is not one of those writers who rests on his laurels, resorts to repeated uses of the same formula, or tires of his protagonist. My gripe, and I think it is more than mere whimsy on my part, is the idiosyncratic mix of crime and horror Connolly has weaved around Parker.

In his helpful guide to the series on the Crime Fiction Lover website, David Prestidge writes that: “The books are peopled with genuinely mean human criminal types, but Connolly introduces supernatural foes in the novels as well.” The books are billed as dark crime fiction in the same way that dark fantasy is now a distinct subcategory of the fantasy genre. To sacrifice accuracy for brevity, dark crime fiction is crime fiction written by a horror writer or a mystery told as a horror story or crime fiction that gestures towards but does not quite cross over into horror fiction… basically, a crime fiction series that is situated just this side of the crime–horror border. The two genres are, of course, complementary to a great extent and it is no surprise that Edgar Allan Poe was such an important figure for both, that Conan Doyle’s The Hound of the Baskervilles is billed as both a great crime story and a great horror story, or that may of H.P. Lovecraft’s weird tales take investigators of some sort as their protagonists. Prestidge continues: “Yet he never uses the paranormal to explain away loopholes in the plot.”

The issue isn’t using the para-normal to fill normal loopholes in the plot, but rather integrating the mystery and horror elements of the narrative such that they complement rather than counteract one another and this is where several weaknesses emerge. First, the books are longer than most mystery novels, the length exacerbated by the often slow and leisurely build-up to the main plot. This would not be problematic were the denouement worth the wait, i.e. a clever or original mix of mystery and magic, sleuthing and the supernatural. But, as Prestidge correctly notes: “There aren’t any [loopholes], and the Charlie Parker books all offer solid and original mysteries. He is a PI, after all.” Crime fiction readers, particularly those who prefer “thrillers” to “mysteries” are accustomed to fast-paced plots and the slower the action, the more drama they demand in the climax. The fact that all supernatural elements are always (at least in the four I have read and according to Prestidge) peripheral to the main plot – always, in other words, a subplot at best – makes me think of the series as crime-dressed-up-as-horror – in a pejorative sheep-in-wolf’s-clothing sense. Parker’s living daughter (Sam) can see the dead and sense evil and the spirit of his dead daughter (Jennifer) communicates with both him and Sam in A Song of Shadows. There are at least two events in the novel – a young girl sleepwalking and the earth opening up under a villain – that are presented as supernatural, but then quickly rationalised (as the dream of a young girl with a neurological disease and as a rare but not improbable geological phenomenon respectively). I found the subsequent debunking of these at times gripping supernatural scenes something of an anti-climax and that term really sums up my whole experience of the book.

Connolly takes a big risk with his villains in using war criminals from the Second World War. Assuming that the events of the narrative are supposed to be contemporary (there is nothing to suggest otherwise) and that National Socialist Germany in extremis may have used sixteen-year-olds as concentration camp guards – and granting that the camps were maintained until the very end of the war – the youngest possible war criminal would be eighty-six. Given the separation of the supernatural from the main plot, the criminals involved are men rather than demons and eighty-six-year-old men are not very frightening – unless, of course, they are million- or billion-aires at the head of a new evil empire. The Nazi-turned-businessman is something of a cliché, but in avoiding the cliché Connolly presents his readers with a group of evil old men doddering around New England, unworthy antagonists for super-sleuth Parker even if he is recovering from the multiple wounds sustained in his previous case. What makes this even worse for me is that the revelation of the main villain occurs relatively early on (for a mystery, that is), which once again creates a sense of… anti-climax.

Connolly’s fans – and there are dozens, probably hundreds, of thousands of them – may well think I haven’t read the book because Goodreads (to name but one forum) has many reviewers writing about the suspense being maintained to the last page and the jaw-dropping conclusion. I think I know what they have in mind, but I am baffled that it should generate such excitement. And yes, I have read all four books carefully from first page to last. Parker is a likeable sort of chap who leads an interesting sort of life, but neither Parker nor his life justifies the many hundreds of pages that each case generates. As mystery stories, the series is far too slow-paced; as horror stories, the continual and continued relegation of the supernatural to the side-line is disappointing; as a combination of mystery and horror, I can’t help but feel that a writer of Connolly’s undoubted skill could have merged a hardboiled PI with a setting that is both gritty and realistic on the one hand and populated by the angels and demons which the series often promises but never delivers on the other. It is only the worry that I have missed some obvious virtue of the novels that kept me coming back, but I’m afraid I’ve decided that life is too short to attempt a fifth… I’m sure Parker and Connolly will both do fine without me.
Posted by Stephen Theaker