Songs of a Dead Dreamer and Grimscribe, by Thomas Ligotti (Penguin Classics) | review by Rafe McGregor 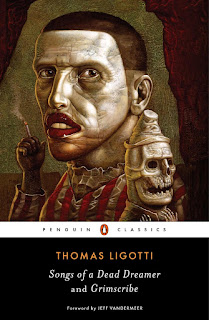 In issue forty-nine I reviewed Thomas Ligotti’s The Spectral Link (2014) and described him as the most accomplished practitioner of weird fiction today. As such, it is satisfying to see that he has finally been admitted to the canon of twentieth century horror fiction by inclusion in the Penguin Classics series, which has recently taken an interesting turn with the publication of relatively obscure works of classic pulp horror fiction, like Clark Ashton Smith’s The Dark Eidolon and Other Fantasies (2014). This is particularly satisfying in Ligotti’s case as although he is in his fourth decade of publishing to great critical acclaim, he has failed to achieve mainstream success – understood in terms of mass market paperback sales. I think there are two reasons for this: although he has published sixteen books to date (excluding the Penguin release, but not The Spectral Link), they have all been collections of short stories, short novellas, or poetry rather than the novel so beloved by commercial publishers. Second, there is the – and I know no better term – weirdness of the stories themselves, which I imagine will not have an appeal beyond horror aficionados in the way that, for example, Stephen King’s work does. Ligotti has nonetheless remained a firm favourite of a limited audience and I was lucky enough to pick up Volume 9, Number 1 (1989) of the long-abandoned Crypt of Cthulhu magazine, with nine short pieces by him, at a recent book fair. The price was very reasonable – too reasonable – and I wish there was more demand for his work.

Penguin have overcome the problem of the public’s preference for substantial volumes by compiling Ligotti’s first two short story collections for their series. Songs of a Dead Dreamer was first published in 1985 and contains nineteen stories and a curious (but fascinating) lecture; Grimscribe was first published in 1991 and contains thirteen stories and an (also curious but fascinating) introduction for a total of thirty-four short works preceded by a foreword from Jeff VanderMeer. VanderMeer is best known for his Ambergris and Southern Reach series and, with his wife Ann, as the foremost anthologist of weird fiction in the twenty-first century. The foreword is everything one would hope from a preface: laudatory without being slavish and informative without being pedantic. VanderMeer is quick to mention “the author’s unique way of seeing the world”, which is precisely the reason I differ from him in my description of Ligotti as a writer of weird tales. VanderMeer sees Ligotti as “always passing through” the weird to the literary, but I do not consider classification as both weird (understood as a subgenre of horror) and literary as incompatible, even if Ligotti’s work is uniquely classified as such.

In my previous review, I focused on two themes explored by Ligotti: the difference between things as they really are and things as we perceive them and the sinister implications of the meaning of “demoralization”. The first story in the collection, “The Frolic”, evinces both of these, but it is the former that has the greater resonance in Ligotti’s oeuvre. In my review of David Tallerman’s The Sign in the Moonlight and Other Stories (2016) in issue fifty-five, I mentioned S.T. Joshi’s definition of weird fiction as embodying a distinctive world-view by the author. There is a sense in which Ligotti’s distinctive world-view is one that explores the deconstructive criticism that was so popular and so infamous towards the end of the last century. There has been a great deal of nonsense written about (and some would say by) Jacques Derrida, who popularised the approach in the sixties, but the basic idea behind deconstruction is simple: human beings (subjective experience) can only gain access to the real world (objective reality) through concepts, which are articulated through language. The worry, which stems from curiosities such as the fact that languages not only use different words for the same concept, but have different concepts that cannot be translated in their entirety, is that no human language and therefore no human conception maps perfectly on to reality. There is obviously plenty of overlap – otherwise we would not be able to build bridges, cure diseases, invent the internet, and fly to the moon – but there is no identity relation between concept and reality. The space that this opens up is the difference between the world as we think it is and the world as it really is, where aspects of the latter are understood to remain permanently inaccessible to us. Ligotti takes this difference and scrapes away at it, making it larger and more frightening. In “The Frolic”, a prison psychologist states of his paedophile patient: “He says he just made the evidence look that way for the dull masses, that what he really means by ‘frolicking’ is a type of activity quite different from, even opposed to, the crimes for which he was convicted.” The actions of the patient are even more horrific than they initially appear for they are not only a form of torture, but a reminder that we live in a world that we are incapable of fully understanding.

One of the features of deconstructive criticism is that it undermines commonly accepted logic and Ligotti’s tales follow suit. A basic principle of logic, for example, is the law of noncontradiction, which states that something cannot be both true and false at the same time, but the narrator of “The Frolic” demurs: ‘“It’s as if I know something and don’t know it at the same time.”‘ He is subsequently shown to both know and not know – knowing where the evidence points and also knowing that his grasp of reality is subjective rather than objective. And later, from “Dream of a Manikin”: “Accredited studies notwithstanding – as I’m sure you would contest – suppose the dreamer is not a man or butterfly, but both … or neither, something else altogether.” This is the most distinctive and the most disturbing element of Ligotti’s horror, the way it deconstructs reality in the philosophical sense. Even if we have good mental health, reality is revealed only through fallible conceptions and this lack of fit between words and world is a frightening subject of contemplation, a gap through which monsters of all kinds can enter. It is not that Ligotti’s monsters are more frightening than those of other authors, but that he exposes our world as a place that remains essentially – necessarily – unknown to us and, as H.P. Lovecraft proclaimed in “Supernatural Horror in Literature” (1927), there is nothing more frightening than the unknown.

The influence of Lovecraft is strongly felt in many, if not most, of these stories – but this is a genuine influence, of his cosmic futilitarianism rather than his strangely named gods and books. Occasionally, it is explicit: the end of “The Last Feast of Harlequin” reveals the story’s dedication to Lovecraft and is a re-writing of “The Festival” (1925) without that story’s flaws (and also acknowledges the influence of Edgar Allan Poe with mention of “the Conqueror Worm”). Mostly, the influence is implicit, from the suggestion of an alien presence in “The Frolic” to the distant similarities between “The Dreaming in Nortown” and “The Shadow Out of Time” (1936) and the more obvious similarities between “The Shadow at the Bottom of the World” and “The Colour Out of Space” (1927). The latter story by Ligotti, the last in Grimscribe, is particularly interesting in that it throws up one of the two major differences between Ligotti and his predecessor: Ligotti is not only a much better writer than Lovecraft, but where Lovecraft was fascinated by rural and far-flung locales, Ligotti’s focus is on urban settings. This choice makes his writing even more unnerving for it is in the towns and cities, where we have self-evidently shaped reality to our own ends, that we should feel most at home in the world – but where the cracks between perception and reality are at their widest.
Posted by Stephen Theaker