Doctor Who, Season 9, by Steven Moffat and friends (BBC) | review 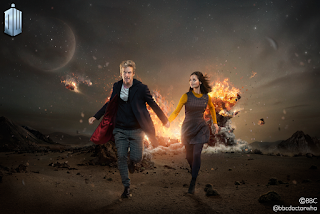 Peter Capaldi returns for a second season as the Doctor, Jenna Coleman for a third as Clara, and Steven Moffat for his fifth as head writer. Not a surprise then that this feels like the work of people who really know what they are doing with these characters. The Doctor at first is travelling alone, having the party of his life in medieval times because he knows there’s trouble up ahead, while Clara is teaching at Coal Hill, where it all began. They are brought back together by Missy, Davros and the Daleks, and by the end of the year they’ll have encountered Odin, the Zygons, ghosts in an undersea base, an immortal girl running a sanctuary for aliens, and the creatures that grow from the sleep in your eyes if you leave it unwashed for too long. They’ll travel to the very end of the universe and back, while ending every other episode on a cliffhanger.

Though this is a very modern series of Doctor Who in most ways, the special effects, writing, sound design, direction and acting always excellent – I’d say film quality at times, if more films were actually this good – it feels like Steven Moffat’s stab at writing a traditional season of the original show: split these episodes in two and you could have five four-part stories, a two-parter, and a six-parter. It’s exciting throughout, different again to Moffat’s previous seasons, always looking for new ways to test the format, expand its possibilities, and hammer at the Doctor’s weaknesses, while also giving children new playground games to play and good advice for life: next season may well focus on the ramifications of the Doctor’s mistakes this time around, but an episode in there about the importance of brushing your teeth would be very helpful. And it is immensely generous, leaving galaxies of room for future writers of novels, comics and audio adventures to explore. Moffat’s plots wind up into tight little knots, but there’s always a thread left for others to follow.

That the new programme is still going a decade on is an incredible achievement, that’s it’s still so brilliant is unbelievable. A credit to everyone who worked on it. Stephen Theaker *****
Posted by Stephen Theaker