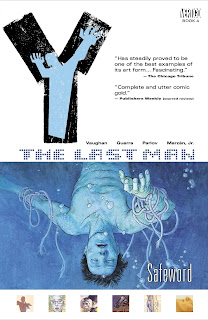 Yorrick Brown is left alive after a plague killed every other man in the world – and every male creature but one, his monkey Ampersand. In this fourth book, collecting issues 18 to 23 of the original series, he is still travelling across America with Dr Allison Mann and Agent 355. They hope to reach Mann’s lab and figure out his immunity, and find a way for the human race to start reproducing again. That’s the long-term plan, but right now Ampersand is ailing from the cut he picked up in the previous book. While Agent 355 and Dr Mann go off to get medicine, they leave Yorick with one of 355’s retired colleagues, Agent 711. His experiences in her log cabin are eye-opening, to say the least, and we learn that Yorick isn’t quite the happy-go-lucky type we had imagined. In the book’s second story, “Widow’s Pass”, the interstate route is blocked by a small but heavily-armed militia, convinced the government is behind the plague and ready to beat any government employees to death until they confess. It’s another terrific volume of this series. The story is gripping, both in the day to day events and the ongoing mysteries. The artwork and colouring is perfect, the action always totally understandable without giving up any dynamism. And this book gives us many more layers to Yorick’s character, as we learn more about his life both before and immediately after the disaster. Best of all is the thoughtful storytelling of the sort that gives us Dr Mann explaining which animal species will die out first, because of their short life cycles: the apocalypse isn’t yet over. Very good indeed. Stephen Theaker ****
Posted by Stephen Theaker