The Hounds of Hell, Book 1: The Eagle’s Companions, by Philippe Thirault and Christian Højgaard (Humanoids) | review by Stephen Theaker 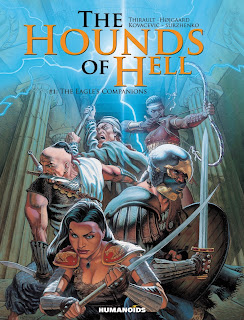 During the sixth century CE, the Emperor Justinian reigns in Byzantium, but dreams of reclaiming the western Roman empire, which has fallen to the barbarians. Angles and Saxons here in the UK, Vandals in Corsica and North Africa, Visigoths in Spain, and Ostrogoths in Italy: Theodoric, king of the Goths, has been named imperial regent. Justinian’s young wife, Theodora Augusta, a worshipper of Pluto, sets in motion a plan. Epidamnos, the warrior-magus, also called Avian, is tasked with reuniting his colleagues, the most fearsome band of mercenaries to ever exist. Or at least those of them that survive: there was a reason they split up. Camarina the Panther, deposed princess of Thrace; Triada, an Amazonian archer (called here the archeress); the Eagle, a scarred general: he summons them all by means of their Edessa stones. Khorsabad Three-Hands he recovers from a prison in the district of thieves. Their mission: to recover the treasure offered by the Roman emperors to the old gods as an apology for ditching them in favour of Christianity. Or at least that’s what they think. This digital album is the first in a series of four (all of which are also available in a single paperback collection), and it does a good job of drawing the team together, showing us what is special about each of them, and getting them started on their adventures, as well as dipping back into their histories. There’s some unpleasant sexual violence, but otherwise it’s an exciting, intriguing adventure that is impeccably drawn and coloured. ***
Posted by Stephen Theaker