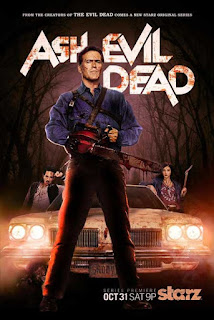 Ash Williams is a sexist jerk with an unfortunate tendency to unleash the forces of hell upon the world. Thirty years ago he found a Necronomicon while on a trip to a cabin in the woods with his girlfriend, and ended up having to squash her head in a vice and cut off his own hand with a chainsaw. Neither has forgiven him. As this ten-part series starts, the Deadites have been quiet for a while, but he still keeps a boomstick in his mobile home. It proves handy after the idiot gets high with a sozzled friend and reads from his Necronomicon… The evil dead return in force, and so Ash, reluctantly, gathers friends to help in the fight. It’s all a bit daft – the spirits seem to be able to take over anybody whenever they like, so the only reason Ash survives is presumably because they like playing with him – but it doesn’t quite reach the stark raving lunacy of Evil Dead II. There are lots of good jump scares, some excellent monsters and one-liners, and it is refreshingly gory. The half hour format works well for the show – it would be hard to keep up the intensity for an hour. Ash’s boorishness and the misogyny of the language used when female characters are possessed is partly balanced by a diverse cast. Ash develops an appealing relationship with Special Agent Fisher, an African-American cop who seems to like him for the idiot that he is, and the scenes with his two likeable protégés are always watchable – they’re a bit like the Doctor, Rory and Amy, if the Doctor were a buffoon and Rory worshipped him anyway. ***
Posted by Stephen Theaker