How a Ghastly Story Was Brought to Light by a Common or Garden Butcher’s Dog, by Johann Peter Hebel (Penguin Classics) | review 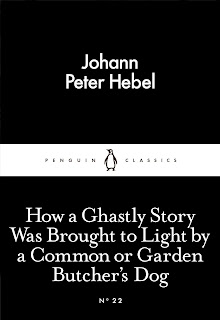 This fifty-three page book manages to pack in twenty-six short stories, as told by Your Family Friend. The back cover describes them as “fables, sketches and tall tales”, but it may remind readers of The Real Hustle, which showed BBC viewers how con artists separate the greedy from their money. These stories would have performed a similarly useful duty for the readers of the eighteenth and nineteenth century, stories like “A Stallholder Duped” and “The Weather Man” showing the kind of tricks people might play. Two favourite stories of mine were “One Word Leads to Another”, in which a man asks what has been happening at home, and, as is so often is the case, the answer “Nothing much” turns out to be an understatement, and “A Secret Beheading”, a strange and terrible tale in which an executioner is kidnapped by unknown parties to do his usual work in a private matter. The back cover tells us that one of these twenty-six stories was Franz Kafka’s favourite, but doesn’t say which – that one, or perhaps the title story, about a pair of two-time murderers, would be my guess. Hebel writes, at least as translated here by John Hibberd and Nicholas Jacobs, much like Rhys Hughes, albeit without the fantasy. See especially “Strange Reckoning at the Inn”, where three clever students try to convince a cleverer-than-they-think pub landlady that since time is a circle and they do not have money to pay their bill, she should be patient and wait for them to return in six thousand years with the money they owe. She points out that they still owe her for the meal they ate six thousand years before. Stephen Theaker ****
Posted by Stephen Theaker