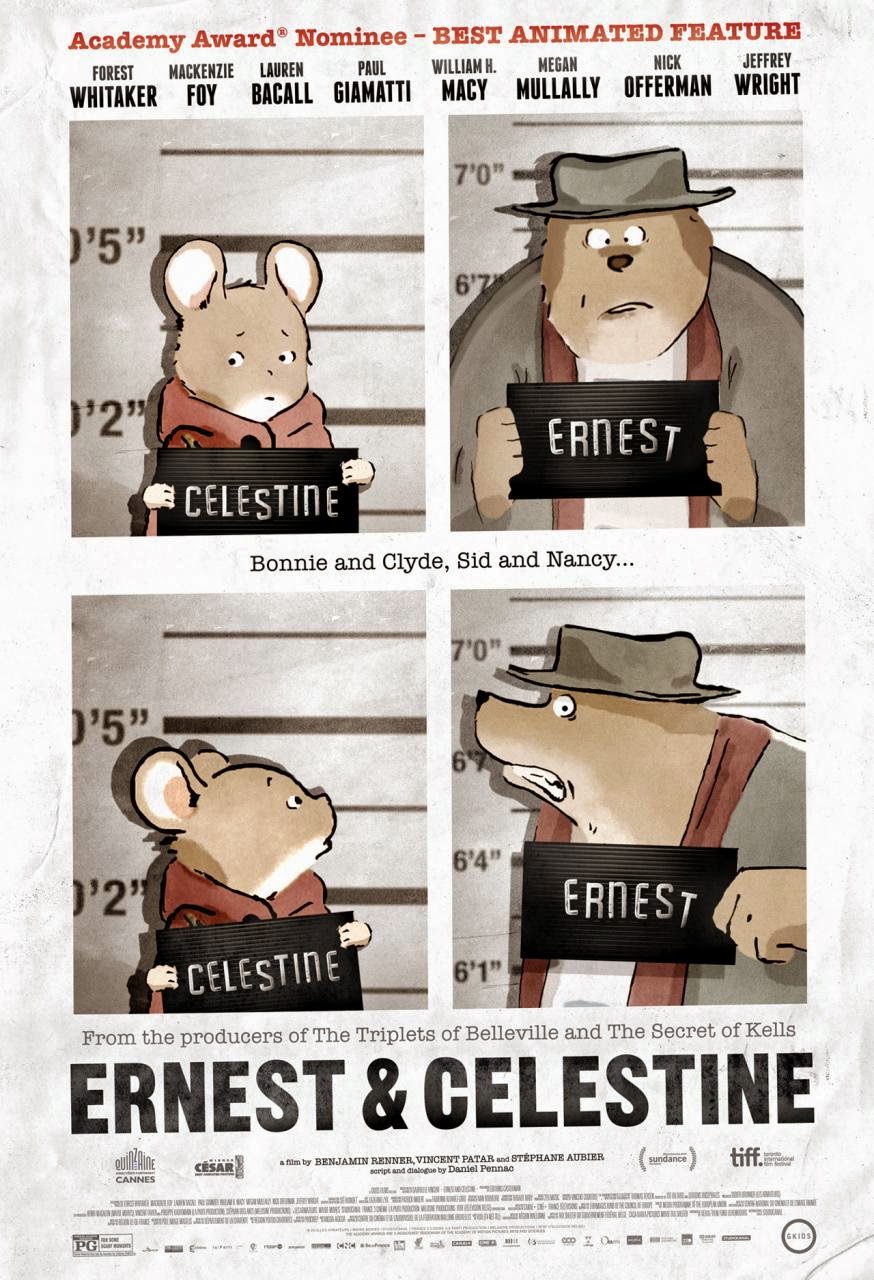 A one-bear band and a winter’s dream for two.

Ernest et Célestine is the story of a bear and a mouse, who through the shared bond of imagination and creativity forge the most unlikely of friendships at odds with the proscriptive bigotry of their aboveground and belowground societies. Ernest is a musician, hungry and busking; Célestine an artist, orphaned and reluctantly indentured to the clinic of tooth collection and restoration. When Célestine dissuades Ernest from eating her, and instead leads him to the storeroom of a lolly shop, the sweet-toothed bear and the dreamy mouse end up on the run from their respective police. These implacable forces – lawful and righteous upholders of the great prejudice – in one poignantly damning scene find themselves to have accidentally mingled while in pursuit, and must each beat a wary retreat. They are suspiciously alike in their antipathy towards the two fugitives, just as Ernest and Célestine are alike in repudiating the conventional wisdom. It is a simple parable, guilelessly enacted.

Ernest et Célestine is an animated film, but not of the computer-modelled, hyper-realistic school from which we see graduate a larger, slicker cohort every year. Whereas its American counterparts revel in the new technologies and give us fully malleable, three-dimensional animations and a myriad of camera shots to show off each permutation, Ernest et Célestine evokes the old school, hand-drawn approach and for the most part is filmed in wide shot, as if we’re looking at a picture book. Instead of jump cuts and close-ups and micro-focus on detail, each scene plays out broadly and in toto, classic and quaint, as if running frame-to-frame along the fast-thumbed, flickering edge of a sketchbook. Nostalgia aside, this is somehow very engaging; and of course, the faster the characters move, the more chaotic the spectacle. The style is well suited both to heartfelt quiet moments and to the frenetic galumphing of bears in enclosed spaces.

Based on the eponymous series of books by Belgian author-illustrator Gabrielle Vincent (penname of Monique Martin), Ernest et Célestine is, by and large, a warm family hug of a tale, and one that would retain much of its cosy sensibility even if watched undubbed or without subtitles. There are some dark overtones, however, to the bear and mice societies, where utopian conformity is never far removed from browbeating and the heavy truncheon of a police state. The topside bears are fearful of the mice, who serve as de facto tooth fairies and so underpin the bear cubs’ formative introduction to consumerism. The mice, meanwhile, think very highly of the well-ordered commune they’ve nibbled out of the sewers, yet are incisor-obsessed and vilifying of the bears, and thus have become zealously concerned with maintaining their own insular existence. Capitalist enterprise versus communist dogma? Perhaps. And though the overall tone of Ernest et Célestine is that of a children’s picture book, individual characters are shaded in accordance with the strength of their misconvictions, the resulting grotesquery on occasion calling to mind the deformed cartoons that Gerald Scarfe produced for Pink Floyd – The Wall. Amidst the soft watercolours established by Gabrielle Vincent for her fantasy realm, the happily ever after never seems too far away, but nor entirely does the frightening dystopia that lurks beneath Ernest’s and Célestine’s nightmares and within the writhing, demonic surge of the mouse police.

Vincent is said by director Benjamin Renner to have upheld a childlike ingenuousness in her art, keeping the scariness of the world at bay by immersing herself in its charms.[1] Renner and co-directors Vincent Patar and Stéphane Aubier evidently have sketched their film designs from this outlook, and in doing so have brought Ernest et Célestine to life as a touching and innocent yet menacing at the edges winter fable: a fitting tribute indeed to a greatly beloved author and her two most famous creations. Those viewers who lay claim to an especially nuanced ear might detect actor Lambert Wilson – who played The Merovingian in The Matrix Reloaded and The Matrix Revolutions – voicing Ernest in the original, French language release of Ernest et Célestine, while those who have attained complete mastery of the apperceptive arts will also distinguish Lauren Bacall as the doom and gloom orphanage caretaker in the English dub. This latter piece of casting seems particularly fitting, given that Bacall (born 1924) and Vincent (1928–2000) were contemporaries, and that Bacall – unlike the gavel-wielding bears and mice who so fervidly seek to condemn Ernest and Célestine – has long been a proponent of liberal democracy. Ernest et Célestine is both sentimental and gently didactic, but it is also very funny; and this ubiquitous humour, rather than being pitched at viewers of different ages and then shoehorned into the script where specially signposted, blossoms instead with spontaneity, and springs up throughout as a natural and heartily observed corollary of the story. Making no obvious distinction between adults and children, yet remaining equally appealing to both, Ernest et Célestine is a lovely film that in years to come may well garner unto itself that much-coveted and (in this instance) tenderly bestowed accolade: timeless.