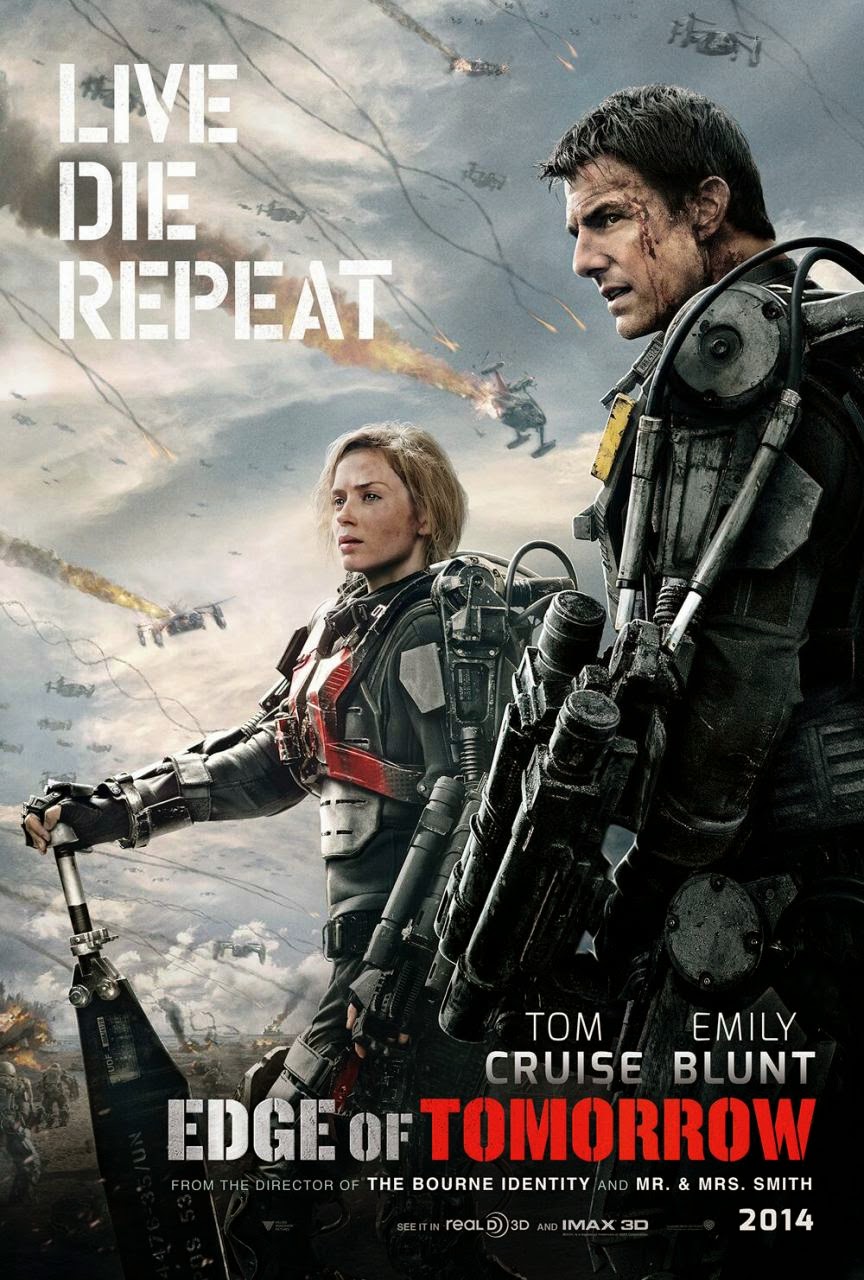 Henceforth, the deceitful must roll a giant jaffa up Hollywood Hill.

Most of Europe has fallen to an alien invasion. Humanity faces extinction. And yet, a new high-tech battle armour brings hope, this being symbolised by Sergeant Rita Vrataski (Emily Blunt) who, thus kitted out as a new recruit, was able to kill hundreds of alien “Mimics” in a single day. On the back of this, mankind’s first victory, the combat gear goes into mass production and the army into recruitment overdrive, massing for a counteroffensive. As Major William Cage (Tom Cruise), glib spokesman for the powers that be, sitting safe at HQ, is pressganged into the front line as insurance against an anticipated public relations backlash post-war, so the scenario is set for Edge of Tomorrow (dir. Doug Liman), an action SF film based on Japanese writer Hiroshi Sakurazaka’s illustrated novella All You Need is Kill. Cage dies within the first few minutes of fighting, doused in the acidic blood of an alien he’s managed to take down. Face dissolving, he screams… and regains consciousness the day before battle.

Spoilers, inevitably, but then again the movie’s tagline is: LIVE. DIE. REPEAT. So, not too hard to figure out.

Yes, it’s Groundhog Day rendered as serious SF. (Although with sufficient humour that a homage wouldn’t have gone astray – the drill sergeant slapping Cage awake with a call of, “It’s Groundhog Day, soldier!”, perhaps, in preparation for the D-Day styled landing that’s to come.) The Mimics, it transpires, have evolved the ability to manipulate time. Hence, whenever one of their “Alphas” (a rare breed) is killed, the “Omega” (the brain behind it all) rewinds the clock by a day, resetting events but retaining the Alpha’s knowledge of what has transpired. This makes the aliens nigh invincible, but it’s also their Achilles’ heel. Through inadvertently being turned into a quasi-Alpha (as was Vrataski before him), Cage is able to replay the day prior to his first death, learning from his mistakes and so progressing deeper and deeper into the battle scenario. Computer gaming is an obvious motif here, but the repetition is handled quite well, the viewer being to a large extent shielded from the Sisyphean drudgery that occasionally threatens Cage with despair. Through trial and error all things should eventually be possible, but can Cage and Vrataski find and kill the Omega before Cage himself is hunted down and drained of his new faculties? The scene is set for a SF classic.

Or at least will be, should Edge of Tomorrow die at the box office and take some critical comments back to director Doug Liman and company pre-filming. If not then we’re stuck with what we see; namely, a wonderful premise that has been artificially bent so as to take the shape of a big fat audience hook.

Love him or hate him, objectively Tom Cruise does a good job in portraying Cage through a gamut of personas. Emily Blunt delivers the perfect mix of prowess and pathos, and may well relegate Sigourney Weaver and Linda Hamilton to lesser places on the SF podium of empowerment. Brendan Gleeson is charismatically cheerless in support; and so, in terms of acting, the money has been well spent. And yet Warner Bros. also invested upwards of $100 million in marketing Edge of Tomorrow – retitled from Sakurazaka’s original due to perceived public negativity evinced by the word “Kill” – and there seems to have been an unhealthy level of attention given to charting pre-release audience hype and anticipating how strongly the film would open at the box office,[1] rather than simply making the best movie possible and trusting to an appreciation of quality. Advertising posters showed Blunt and Cruise with pride of place given to their battle armour – the spectacle rather than the substance of a production that didn’t yet have much, the script itself at this stage still lingering through a process of being reworked, re-authored, revised, then re-authored twice more, yet still having no ending by the time that filming commenced.[2] Whether this is more damning of Liman (who at least was striving for a finale, albeit graspingly) or of Warner Bros. (who clearly didn’t care one way or the other), what emerges is an alarming imperative to market first, shoot later and ask questions only in retrospect, all the while making concessions to some profiler’s forecast of what today’s audience must want, expect and (que será, será) be given. One might suspect that this is not how the SF masterpieces of the past came to be made.

Edge of Tomorrow is engrossing, to be sure, and has fought its way to the silver screen without having had its brains blown out; yet, still it has sacrificed something of its artistic vision in pandering to the bottom line, and the supposed tastes of a first- and second-weekend opening crowd. In Sakurazaka’s novella, which is set in Japan, the Mimics take their form from starfish that alien nanobots have forcibly evolved. The beach setting therefore makes sense, but the creatures themselves less so when their initial incursion has been transposed to central Europe. Furthermore, the Mimics are invested with too great a power (oh, blessed effects) to function naturally within a plot that has punched several holes through itself while being many times re-scripted for benefit of Hollywood’s unnatural selection. That the aliens are waiting in ambush suggests that humanity’s charge through France must have played out at least once before, and with sufficient effectiveness to kill an Alpha. Notwithstanding Cage’s first-mission bumbling, however, it is difficult to imagine how this could be the case. Vrataski has lost her pseudo-Alpha abilities (or so she feels; presumably she hasn’t tested this), and without her carefully rehearsed revisions, the army must surely have had about as much chance of mounting a successful onslaught as the actors would have if called upon to extemporise all their dialogue in Japanese. Moreover, it is manifestly unclear why the campaign is being fought by ground soldiers. Memories of Iraq? Normandy? Gallipoli? Yes, it’s something of a paean to futility and our vivid and confronting history of military blunders, but in this instance there are no civilians to worry about; no technological limitations as per World War Two or One. Therefore… Rockets, anyone? Lots of lovely guided missiles, stockpiled for a rainy day and dusted off at last to blow the shiitake out of something multi-leggèd and squidgy? No? Well, maybe next time.

All told, Edge of Tomorrow has too many contrivances – Cage’s blinkered lack of initiative; Dr Carter’s magic Omega-locator; whatever banal version of the ending is showing today – to qualify for anything more celebrated than a single viewing; which is a shame, because for much of that viewing it presents as a film that might not be out of place on the hallowed DVD shelf of SF for the ages. In the end, though, this was Hollywood trying to convince itself while publicity ringmasters inculcated upon prospective audiences the importance of forming sale day queues outside the cinema. History will show that Edge of Tomorrow, sharp-toothed specimen though it may be, was sharp in the wrong places, over-evolved to meet the glittery requirements of Tinseltown’s creative cul-de-sac. Gloss up. Dumb down. Market. Repeat. Thus runs the tepid loop, Alpha blockbusters reporting back to executive Omegas while viewers wait helpless and unknowing for tomorrow to come.