As Above, So Below / review by Douglas J. Ogurek 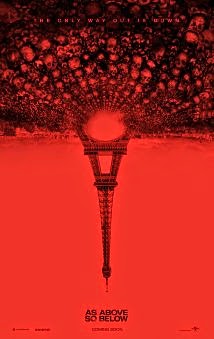 A group gets lost in a maze-like expanse and the threats escalate. Maybe some make it out, maybe none do. The Blair Witch Project (1999) employed the technique masterfully in a wooded setting. The Descent (2005) took the concept to an underground cave system inhabited by violent creatures. The less well-known but still impressive Grave Encounters (2011) used an abandoned asylum.

With As Above, So Below (AASB), director John Erick Dowdle takes to the catacombs beneath Paris to add another gem to the vault of lost in creepy places films. AASB mixes the treasure-hunting adventure of Indiana Jones with the underground exploration of The Descent.

Young Scarlett Marlowe—is that a Heart of Darkness reference?—is quite the archaeologist. She holds multiple degrees, speaks five languages, and approaches her goals with unflagging determination. Though she has all the introspection of a cave bat, she approaches her mission with, to put it bluntly, “balls of steel”. Scarlett continues her father’s driven-to-madness quest to find the Philosopher Stone that holds the key to alchemy and eternal youth. So the Brit bats her eyelashes, mentions hidden treasures, and talks, talks, talks to convince a group of Americans and French to take to the Parisian catacombs, where she believes the stone is hidden.

During their expedition, the group will encounter an increasingly disturbing and dangerous menagerie of horrors. They will crawl over rat-infested bones and attempt to squeeze through the tightest of openings. They will approach dark passages and descend darker tunnels in which scares both cheap and exquisite await. In the most disturbing scenes, they will confront motionless figures. Are they alive? Will they move? An odd collection of sounds (e.g. female cult chanting, distant growling, even a telephone) augments the ominous tone that pervades this film.

These elements add up to make this one of the tensest films this reviewer has seen in a while.

Critics Don’t Get It
Many critics have derided AASB as thin and rudimentary. Sure, the characters aren’t fully developed and are driven by a Scooby Doo-like mentality, but we do know that Scarlett’s archaeologist father was driven to suicide by his quest, and that (kind of) love interest George witnessed the drowning of his younger brother. Isn’t that enough?

Several critics have commented on the senselessness behind this quest. Although the map viewing, clue accumulation, and especially the translation of ancient Arabic into rhymed verse that kick off the film are silly, there is also some historical information about the catacombs. Still, none of that really matters once the crew plunges into the catacombs. They could have been looking for a slice of pizza and it still would have been engaging.

Then there’s the ongoing critical gripe about the overuse of the found footage filming technique. It’s too shaky, they complain. There’s no justification for using it. I can’t tell what’s going on. How about this: it makes the film seem real. In an age of selfies and home videos, found footage adds a sense of authenticity.

As Halloween approaches, many of us will line up at abandoned buildings temporarily converted into haunted houses. And if, while exploring the dark corridors and spooky chambers, our hearts are repeatedly jump-started, then we will consider that venue a success. Who says that a movie can’t be judged by the same criteria? **** -- Douglas J. Ogurek
Posted by Douglas J. Ogurek