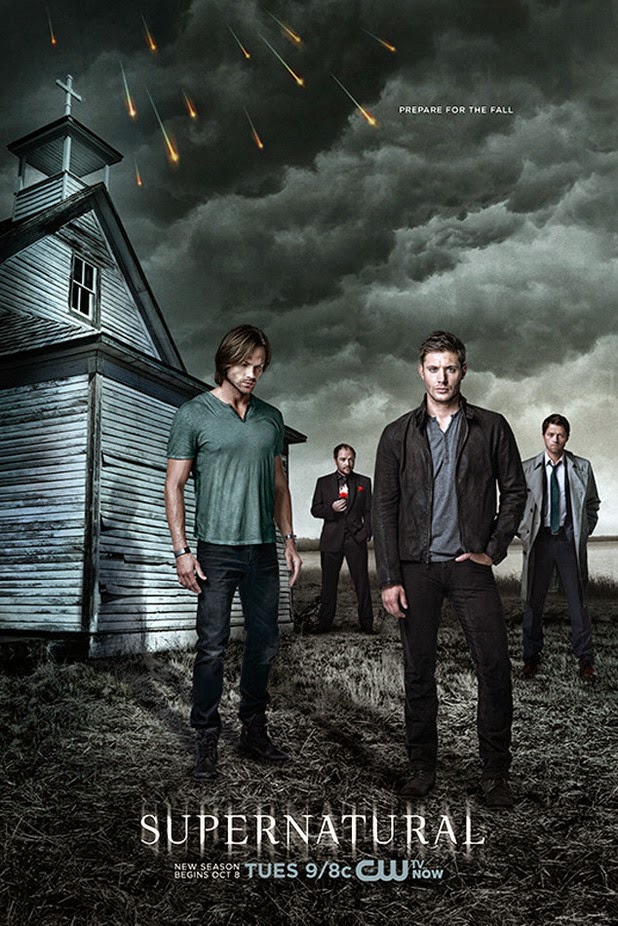 The ninth season of this long-running series about a pair of monster fighters begins with the boys – well, men now! – suffering the after-effects of their attempt to close the gates of hell in season eight. Sam is in a hospital bed, in a coma, and the outlook isn’t good. The other consequence of season eight’s conclusion was that all the angels fell from heaven, wings burning, thanks to Metatron’s betrayal. One of those angels approaches Dean with an offer. He’ll enter Sam’s body and fix it from the inside, but there’s a catch: Dean mustn’t tell Sam. And so the two brothers are back to keeping secrets again.

The world needs the Winchesters as much as ever. A resurrected Knight of Hell is challenging cuddly old Crowley for the crown. Many angels died in the fall, but the survivors are not getting along and are looking for host bodies – evangelists are only too happy to help, even if half of those thus possessed simply explode.

This is another good season of a reliable show. I sometimes wish it’d move on from the angels and demons storylines, but when this season also features a Wicked Witch from Oz, werewolves preparing for Ragnarok, a guy who is experimenting with combinations of animal powers, and the return of Cain (played wonderfully by Psych’s Timothy Omundson), the first murderer, you can’t complain too much about the variety.

Part of the programme’s longevity must be down to its ability to contain within itself a wide range of moods, from tortured guilt and gut-wrenching horror to postmodern games (would-be god Metatron lecturing the viewer on story structure) and daft humour (Dean learning to speak dog, and in the process coming to appreciate a good game of fetch).

The one duff episode this season is “Bloodlines”, a backdoor pilot for a proposed spin-off that didn’t get off the ground. Showing the lives and loves of the warring monster families of Chicago, it seems like an attempt to do Gossip Girl within the Supernatural universe. That may sound daft but Arrow seems to have done well with a similarly unpromising premise. I won’t mourn the spin-off, especially since Supernatural itself has just been renewed for an eleventh series, so no one’s jobs are on the line.

Not sure how long it’ll be before we get to see season 10 – E4 have just picked up the show, but aren’t known for their timeliness – but I’m sure we’ll wolf it down as quickly as we did this one. That’s pretty much unprecedented for me with an American drama that has gone on for so long. Even NCIS (which has a similar knack of combining humour and high drama) fell off our radar eventually. But we’ll keep watching Supernatural as long as they keep making it with this much verve and imagination. ****
Posted by Stephen Theaker