The Forever Watch by David Ramirez / review by Jacob Edwards 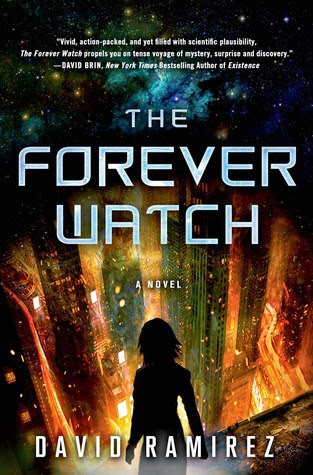 First up, the funambulist.

Entrenched within the Noah, an unimaginably vast city-spaceship, the remnants of mankind trek obdurately through space en route to a new home-world. Adults labour for the common cause, enduring whatever stringencies are necessary. Children are raised by the state, the course of their lives determined by aptitude tests and the latent strength of their psychic abilities. Hundreds of generations pass. The mission is everything. Yet, for all she has been indoctrinated to believe that species survival is paramount, telekinesist Hana Dempsey, suddenly at odds with the power-elite who run the ship, finds herself embroiled in an unsanctioned hunt for a serial killer who shouldn’t exist but whose grisly touch ghosts across the Noah’s Nth Web, hinting at a conspiracy beyond nightmare.

In terms of concept, debut novelist David Ramirez with The Forever Watch sets out to walk a tightrope. Stylistically, he does so without a safety net. There are some wobbles along the way, yet by the end of the book there can be little doubt that, should he be able to repeat and build on the performance, he will garner sufficient reputation to secure a future in the profession.

The Forever Watch is written in the present tense, which from the outset puts it in an odd minority. The shift in perspective requires a degree of acclimatisation – from both reader and writer; Ramirez sways woozily on a few occasions when shuffling from absolute to relative tense – but soon ceases to be a distraction. There is a sense of immediacy to eyewitness accounts presented in this way, particularly as Ramirez favours short sentences; the story is told through small blocks of thought, almost as if unfolding in real time.

Further to the boldness of making a novel-length foray in the present tense, Ramirez transplants his authorial voice into a female protagonist for the first person narrative. Male writers have been (collectively) accused of underrepresenting women in science fiction. Ramirez therefore deserves credit for placing Hana Dempsey at the crux of his world; but of course, in doing so he lays himself open to all manner of possible criticisms as to the fidelity of his depiction. The men in the story are themselves a mixed bag: minor character Hennessy, for example, is given a certain depth, whereas Barrens (second billed behind Dempsey) is somewhat stereotyped to cyberpunk preconceptions and speaks in a jarring, unwarrantable pulp-detective patois. The characterisation of Hana serves perfectly well in the gender-neutral sense of moving the plot forwards; for some readers, however, judgment of The Forever Watch may ultimately come down to a verdict on whether Ramirez’s portrayal of her is closer to creditable or culpable.

One undeniable strength of Ramirez’s work is his imagining of the Noah’s insular, pseudo-totalitarian society, the basic framework of which is established via an adroit series of flashbacks to earlier in Hana’s life (still written in the present tense) and then fleshed out as events unfold in the here and now. The world of The Forever Watch is vividly realised and integral to Ramirez’s story, yet has been unobtrusively (though very deliberately) brought to life. What is most impressive about this is not so much the creative vision but Ramirez’s commitment to what he has put in place; rather than preserve his setting for possible sequels, he instead allows the scenario to play out in full, affording scope not only for a symbiosis between action and locale but also for a novel that is unusual in its high level of self-containment.

Having set off across the tightrope, Ramirez does falter slightly at about the quarter-way mark (there is a lull in impetus, which many will find off-putting), but he then takes a deep breath and forges ahead, letting the balancing act play out come what may. For all that each step follows the previous, the shadowy endpoint he reaches is considerably removed both from where Hana and Barrens started and from where we might have expected their investigation to lead. In what is a darkly satisfying, uncompromising debut, The Forever Watch sends an exotic, visceral shiver through the dystopian genre, and in doing so flags Ramirez as an author to be kept under close observation.
Posted by Stephen Theaker