The Hobbit: The Battle of the Five Armies / review by Douglas J. Ogurek 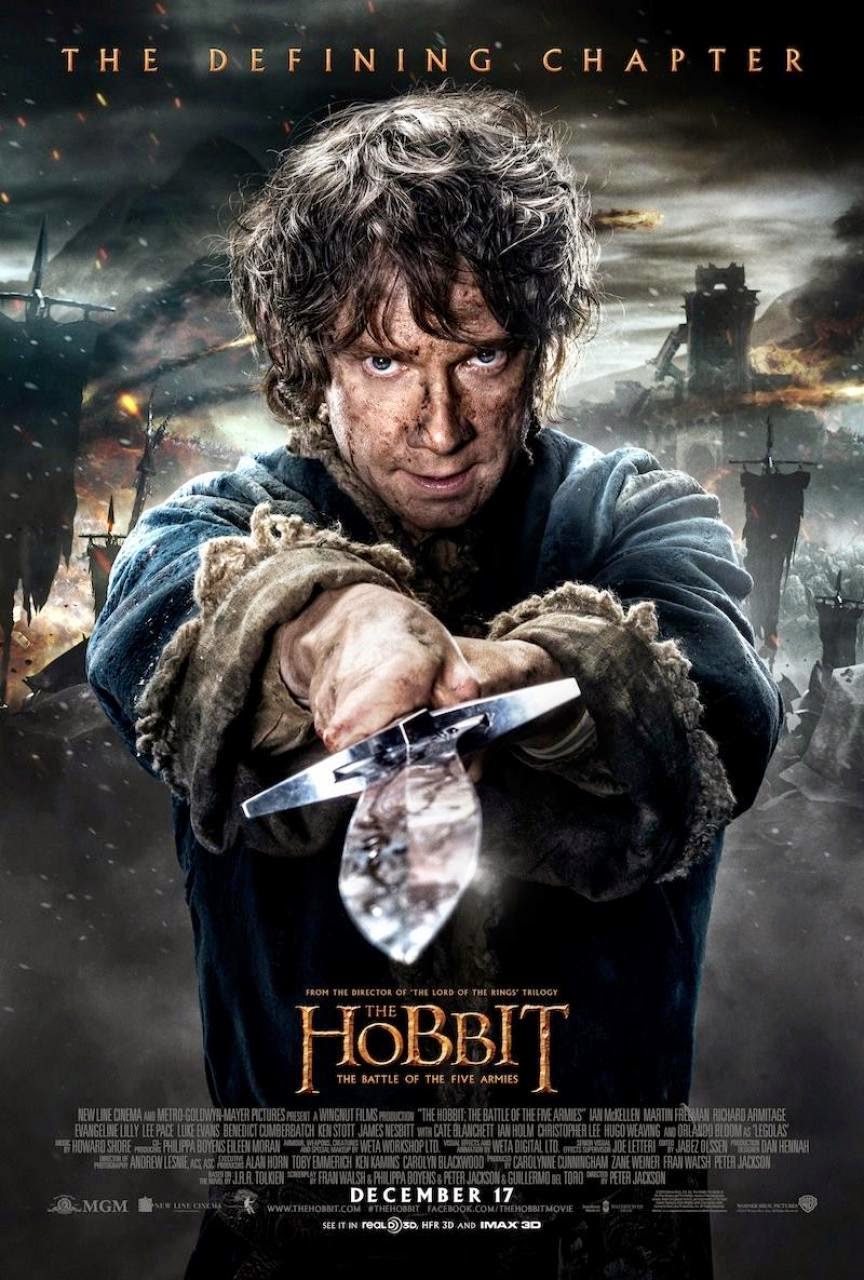 Epic trilogy closes with brutality and finesse. If you’re seeing this film in the theater, do not buy a giant soda: there is no good time to go to the loo.

The dragon Smaug is pissed. The Dwarves have banished him from the treasure-filled Lonely Mountain that he stole from their ancestors. Now the fires rage in Smaug’s belly as he approaches the human-occupied Lake-town to take out some of his frustration. Thus begins a riveting opening sequence that will set the tone for the final installment of director Peter Jackson’s The Hobbit trilogy.

The film’s title, The Hobbit: The Battle of the Five Armies, makes a hefty promise: there aren’t just two, three, or even four armies destined to clash. This is J.R.R. Tolkien, and this is epic fantasy in which the fate of the world is in jeopardy. So in the end, five armies will go at it! And Peter Jackson continues to deliver what he has brought in all his adaptations of Tolkien’s classics since the Fellowship of the Ring first gathered back in 2001: acts of valour and treachery, displays of inhuman (Elven, to be precise) agility, seemingly insurmountable obstacles overcome, and speeches that, despite the often small stature of their speakers, deliver a wallop.

Word has spread that Smaug has left the treasure. Now everyone wants a piece. The Men of Lake-town want the share that Thorin Oakenshield, leader of the Dwarf band now holed up in the Lonely Mountain, promised. The Elves want to reclaim a handful of gems (also in the mountain) sacred to their race. And unbeknownst to most, the ruffian Azog is leading a massive Orc army to the Lonely Mountain. Dwarves, Elves, Men, Orcs, and a mysterious fifth army. The movie builds toward the battle outside the entrance to the Lonely Mountain. It is coming, it’s going to be big, and at its center bravely stands Bilbo Baggins, the series’ namesake, in all three feet of his splendor.

A Thorin in Middle-earth’s Side
Most of the fate of Middle-earth rests on Thorin Oakenshield, the heir to Erebor (i.e., the Lonely Mountain). There’s just one problem: Thorin seems more interested in protecting the mountain’s treasure hoard than he is in keeping peace or helping his Dwarf race survive. For all those who want to stake a claim to the mountain’s treasures, forget it; Thorin is in the throes of the gold sickness that claimed his father.

Thorin’s growing greed disappoints traveling companion Bilbo Baggins, jeopardises Dwarf relations with the Men and the Elves, and has the potential to allow evil to overtake the world. It’s the money thing.

During discussions with his Dwarf companions and with Bilbo, Thorin reveals the extent of his depravity. His face alters as he tells fellow Dwarf Dwalin that he isn’t above killing other Dwarves to get what he wants. During a conversation between Thorin and Bilbo, the camera shows an extreme close-up of Thorin as the film speed slows and he vows that he “will not part with a single coin”.

It would take a monumental self-discovery for Thorin Oakenshield to change his ways, and monumentality is what The Hobbit films are all about.

More Great Battles
The battlefield action offers everything one would expect from a Tolkien-inspired Peter Jackson film: destruction, gigantic creatures, displays of bravery, and acts of cowardice. Though the full-scale battlefield action is enjoyable—note the contrast between the gleaming and orderly Elven army and the comparatively uncouth Dwarf army—what impresses most is when protagonists confront their Orc nemeses in one-on-one action. Watch for the battle on ice in which an Orc tries to crush his much smaller adversary by swinging a chain attached to a massive block.

At some point in the battle, the filmgoer is likely to question whether Legolas will enter the fray. Enter he does! From his transit into the action to his fight with a key antagonist, the Elven master bowman holds his reign as the most exciting character to watch in action. Best of all, we know that Legolas won’t die: he’s in the The Lord of the Rings adventure that follows.

It’s Not Just the Fights
On the surface, this film is all about fighting. Note the film’s title, or the posters that depict Bilbo Baggins brandishing his little sword. However, despite this heavy focus on physical battle, the fate of Middle-earth also hinges on a Hobbit whose true power lies not in battlefield skill, but rather in guile.

What Thorin Oakenshield wants most is the Arkenstone, a jewel that he needs to consummate his power. Thorin commands his followers to find the stone amongst the mountain’s treasures, but Bilbo has a trick up his sleeve, or rather in his pocket: concluding that more harm than good may occur if Thorin gets the stone, Bilbo selflessly conceals it. This decision comes at great risk to the Hobbit, for if Thorin discovers the truth, he will likely kill Bilbo.

Bilbo also gives the filmgoer a character with whom to identify. When we see the agility of the Elves, the strength of the Dwarves, and the barbarity of the Orcs, we might feel as helpless as Hobbits on the battlefield. Martin Freeman’s Bilbo Baggins, with his curious expressions and his occasional nose twitch, gives us a down-to-earth traveling companion who makes us comfortable and gives us a moral ideal toward which to aspire. Repeatedly, Bilbo proves his friendship to Thorin and to the Dwarves. Even when Thorin wallows in his gold sickness, Bilbo manages to evoke a smile.

The Journey Ends
In a brief scene near the end of this film, Gandalf the Grey (wizard) sits beside Bilbo. While the wizard taps and prods his trademark pipe, Bilbo twitches his nose and appears to struggle to find words. Their quest has been long and arduous. They have experienced major triumphs and major losses. These friends who started the journey to Erebor together decide to withhold the dramatic speech and instead, simply smile at one another. Some might consider this a throwaway scene, but this reviewer considers it among the most touching scenes in the series.

Thus concludes a trilogy made enjoyable in so many ways: music, maps, characters, speeches, conflicts, drama, action, creatures, costumes, setting. Perhaps some of us will learn from its central message: “If more of us valued home above gold, it would be a merrier world.” True, true. But having a $250 million movie budget helps deliver that message exceptionally well! – Douglas J. Ogurek

Email ThisBlogThis!Share to TwitterShare to FacebookShare to Pinterest
Labels: Battle of the Five Armies, Douglas Ogurek, Film Reviews, The Hobbit