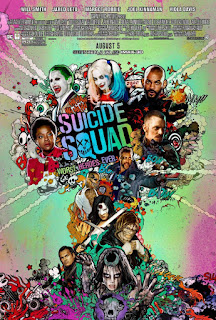 The playful colours and reckless tone of Suicide Squad advertisements suggest a departure from the typical superhero film. Unfortunately, excepting the antics of one flamboyant couple, the film is too dull and safe to live up to the hype.

Director David Ayers presents a Gotham where one of the most beloved superheroes appears to be dead. The ruthless Dr Amanda Waller (Viola Davis) assembles the worst of the worst criminals as a safety measure. Suicide Squad starts strong, giving viewers a taste of the “metahuman” recruits’ powers, ranging from Deadshot’s (Will Smith) incredible accuracy to the pyrokinesis of remorseful gangster Diablo (Jay Hernandez).

The antiheroes get microchips embedded in their necks – they misbehave, and boom! – then soldier Rick Flag leads them on a mission to rescue an unknown operative. In the meantime, archaeologist Dr June Moone (also Flag’s girlfriend) struggles to subdue Enchantress, the ancient witch who resides within her. Moon fails, so the Enchantress sets in motion a plan to destroy the world.

The squad blasts and pounds away at Enchantress’s faceless, lumpy-skinned henchmen that an eight-year-old girl could defeat. Half of the squad consists of underdeveloped dullards with little to no backstory. For instance, Australian burglar Boomerang adds nothing to the film and swordswoman Katana seems to spend more time posing than fighting. Winning the booby prize for most annoying character, however, is Killer Croc. This sewer-dwelling goon makes comments that make you want to slap your forehead.

Enchantress spends too much time using her magic to swirl garbage in the sky to build a “machine” that will destroy humanity, while her brother, a flaming monster with elastic burning body parts, protects her. How long does it take to build this thing? Also, one has to question why Enchantress, arguably more powerful than any of the Suicide Squad members, would resort to hand-to-hand combat.

An Adorably Idiosyncratic Couple
What makes this film worth seeing is the eccentric duo of the Joker (not a Suicide Squad member) and Harley Quinn. Their effervescent personalities and their vivid costumes echo the vitality of the film’s soundtrack, which ranges from Eminem and Kanye West to Ozzy Osbourne and The Rolling Stones.

Jared Leto’s Joker admirably fills the shoes of Jack Nicholson and Heath Ledger, but also puts a new spin on the beloved arch villain. This bling- and tattoo-laden Joker retains Ledger’s dramatic gestures and adds a penchant for baring silver-capped teeth in the style of James Bond’s Jaws.

Then there is Dr Harleen Quinzel (Margot Robbie), who the Joker seduced, then transformed into quirky criminal Harley Quinn. Quinn stands out by far as the Suicide Squad’s most entertaining character. “Huh? What was that? I should kill everyone and escape?” she says
in her Brooklyn accent before an audience of simultaneously attracted and wary law enforcers. “Sorry. The voices. Ahaha, I'm kidding! Jeez! That’s not what they really said.”

Quinn fills a gap in the world of female superheroes. The bubble blowing, the exaggerated swagger, and the cutesy Betty Boopesque sexuality merge with the questionable insanity, plus Quinn is somewhat of a sweetheart. She wields a baseball bat that says “Good Night”. Her necklace – it’s more like a dog collar – that says “PUDDIN” (her nickname for the Joker) in bold gold letters reveals her obsession with the villain.

Suicide Squad offers a couple of iconic raised shots featuring these two. In one, weapons and dolls surround the Joker, who lies on the floor and laughs distinctively. In another, the lovers kiss in a vat of unknown liquid – is that pudding? – surrounded by swirls of the Joker’s colourful paint.

Don’t be surprised to find yourself rooting not so much for the Suicide Squad to succeed, but rather for the Joker and Harley Quinn to reunite. Interesting, isn’t it, that the most entertaining characters in this film really don’t have any super powers? A testimony to the magic of character.

Alas, despite the vibrancy of these two, Suicide Squad doesn’t make the cut when compared to this year’s other superb superhero films like Captain America: Civil War, X-Men: Apocalypse, and especially Deadpool. – Douglas J. Ogurek ***