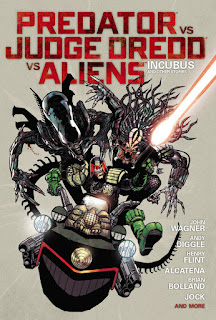 Judge Dredd and his fellow lawmen here face two extraterrestrial threats from the silver screen. In the first story a Predator crashes in the Cursed Earth, and from there makes his or her way to Mega-City One, where four hundred million people are already losing their minds. The Predator quickly realises that the judges are the big game here, and begins to collect its gruesome trophies. A somewhat psychic descendant of Arnold Schwarzenegger’s character from the first film is called in to help in the search. Alcatena’s artwork is very appealing, but is maybe a bit cute for this story. The Aliens story that follows is much more memorable, perhaps because the Predator doesn’t offer much of a threat to Mega-City One. It kills a lot of people, but it’s essentially a nuisance – whereas the Aliens are a plague that threatens total extinction. Henry Flint’s art looks a lot like Carlos Ezquerra’s, so this feels like authentic Dredd from the beginning. The Mega-City offers a million dark places for an alien to hide and lay its eggs. A space pirate brought them here to conquer the city, but luckily another idiot thought he could breed them for use in fighting pits and got himself infected – his exploding chest and the thing that comes out of him gets Dredd on the case. Great use of Dredd, the Mega-City, and the aliens. ***
Posted by Stephen Theaker