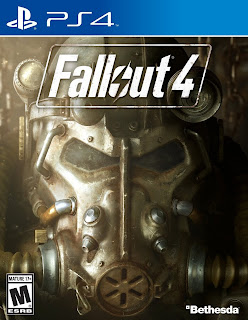 I didn’t mention this in the editorial to TQF55, but Bethesda are partly responsible for a huge distraction when it came to putting that issue together. Having bought a PS4 with Fallout 4 as part of the package, and being a bit of a Fallout 3 and Fallout New Vegas vet, I was eager to load the game, having watched various YouTube first playthrough and guide vids. Time exists as an entirely different entity when playing this game, as your perception of the outside world is taken over by this new reality. Crazy!

The game is an astonishing achievement, certainly a leap far beyond that of Fallout 3 and the latter Fallout New Vegas. Obviously the visual and audio aspects are superior due to the PS4’s processors, but Bethesda have built upon the unique gaming concept of the previous Fallout offerings and improved upon the idea superbly. Not that Fallout 4 is without its minor faults – but these can be excused as the game is just so damn good, and looks absolutely beautiful. Reading back through this review, I can honestly say that I’m only scratching the surface of the whole experience – to go into great depth would be impossible within these pages, and any attempt by me to do so would only serve to spoil the game. I’m just gonna stick to some of the core aspects, just to give you a flavour.

The backstory is simple: In a 1950sesque U.S. / future alternate history mashup, atomic war begins. You run with your family to a Vault where you will be protected from the devastation. You awake early to witness your (in my case) wife being killed in her hypersleep chamber and your infant son kidnapped. Escaping the vault to track down your son, you are greeted by an atomic wasteland. Various mutated beasts and creatures inhabit this wasteland, and as the story unfolds you – as per previous Fallout outings into the wasteland – establish yourself with the many and varied inhabitants and factions you encounter. There’s a great depth here. The game’s narrative provides a convincing array of human and non-human groups and settlements, all with their own unique take on life in the wasteland. It’s easy to get caught up in the dialog of these characters – where before with Fallout 3, I found myself skipping a lot of the dialog and interactive conversation choices to just get on with it. With 4, I find myself listening more, taking in all the information, interacting more with the characters. This is down not only to the visuals, but also the voice acting. There’s a lot of info dumping here, but it all knits together to form this vast tapestry which is the wasteland. Bethesda have removed the You’re good for doing / saying this / that, you’re bad for doing / saying this / that / idea which could instantly stall the game as you hit pause to consider the ramifications of your actions. New Vegas suffered from being bogged down with so many choices of which character or group to befriend, it became a real problem, taking away from the enjoyment of actually moving around the environment and, well, playing. Saying this, Fallout 4 is hardly a “game” as such – it’s more of a simulation. You’re out there in the wilderness, trying to find your son, trying to stay alive. On the way you’ll be offered companionship, but I chose to stick with my first companion offering, an Alsatian called Dogmeat. He helps you through tough spots, sniffs gear out for you to pick up, and provides a few lighter moments as he rolls around in the dirt, or finds a teddy bear to play with. All this love for a digital dog, from a cat man!

This survival concept is but a small part of the whole. As before with Bethesda’s Skyrim, you can craft weapons, harvest food to cook potions for healing and power-ups. But the experience is far more than just that. Now you can build settlements, encourage settlers to be part of your community, but hey – if you don’t provide basics such as food, water, shelter, electricity, defence, a bed to sleep in and a roof over their heads, they get grumpy. This is where the “game” really sets itself apart. Suddenly you the participant have changed the pace. You can ignore a mission asking you to defend another farm or plant nursery from rampaging raiders, and build, slow the game down and enjoy the addictive pleasure of constructing a community and looking after these poor souls that have chosen to join you, and at your pace. Shacks, small houses, animal pens, bridge walkways, fenced off gardens can be built to name a few. This is where the “game” sets itself above others, as practically every item in the wasteland has a value – not only monetary, but also (and more importantly for this aspect) as a material commodity. Steel, plastic, wood, oil, glass, electronics, you name it, they can all be scavenged and stored to be utilised to build your settlement. These materials can also be used to upgrade weapons and power armour. Once a settlement thrives, you can move on to another, help them, plant more food to attract more settlers and then set up trade routes between them to provide income for yourself. It’s a bonkers concept, but one we can all identify with. No player settlement will be identical to another’s. My daughter decided for her game, the most important aspect of her settlement are small “personal” shacks with just two beds, rather than my large dormitory building holding 17 beds. Opposite her curved metal bedrooms she built toilets, replete with “his” and “hers” signs, and if I know her, to follow will probably be a bloody great white picket fenced garden, growing corn, potatoes, melons, gourds, defended by a couple of machine gun turrets.

If this all sounds a little too twee, then the options are there to just go out and explore and pick up missions to up your XP and level up. Set a marker on your map and you’ll come across beautiful vistas of devastation. Towns and cities you cannot refuse to explore, as exploration’s in our nature. And in these highly detailed locations, when the sun’s going down and the rain courses through the streets, lightning momentarily illuminating the damp bricks and rusted cars as the thunder booms, you’ll round a corner and find…

Well, absolutely anything really. It’s up to you to find out.