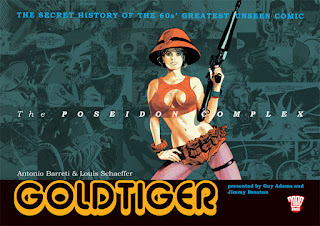 Lily Gold and Jack Tiger are fashion designers at London’s most stylish fashion house, Goldtiger, but have a side project: adventure. In this book, collecting newspaper strips which supposedly appeared in the Maltese Clarion during the sixties, they investigate the disappearance of a number of boats on the Thames. Eventually this will lead them to the carnivorous Mr Sobek, but before then the putative artist of the strip, Antonio Barreti, will get bored of the scripts provided by Louis Schaeffer and begin to draw whatever the heck he likes, to the point of inserting himself into the story. In reality, this is the work of Guy Adams and Jimmy Broxton. The idea of the book is neat, and the strips do a good job of recreating the feel of the actual Modesty Blaise or James Bond strips from that period. But there are so few of them: by my count just eighty-nine finished strips, appearing two to a page, which means they only fill about a third of the book, the rest being substantially padded out with text pieces, photographs and rejigged pieces of art. The Goldtiger adventure is okay, but there’s never time to get into it, while the text pieces spend a lot of time telling us how outrageous and shocking the strips are, which the strips don’t really live up to. It was a potentially interesting project, and you can see why it picked up plenty of backers on Kickstarter before finding a home with Rebellion, but it feels half-finished and scraped together. That may be deliberate, all part of the gimmick, but readers who like the sound of it will probably have more fun with Modesty Blaise herself. **
Posted by Stephen Theaker