The Cobbler, by Tom McCarthy and Paul Sado (Voltage Pictures and others) | review 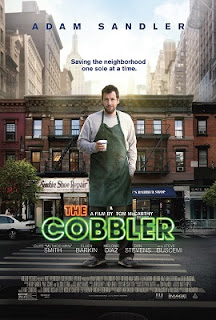 Max Simkin has been struggling since his dad left, a long time ago now. He’s angry at the guy for going, a feeling not helped by going to work each day in the shoe repair shop where his father worked, as well as his grandfather and great-grandfather. Max’s mother suffers from dementia, and her well-meaning suggestions to take a nice girl out just drive home the point that all the nice girls he used to know have been married for fifteen years with children. A change in his life is provoked by the appearance in his shop of an obnoxious and aggressive criminal, played by Method Man of the Wu-Tang Clan, who doesn’t want the shop to close till he’s got his shoes. Max’s cobbling machine breaks down and because of the urgency he goes down into the basement and gets out an old machine – a magical machine! He discovers that when he uses it to stitch the soles of a pair of shoes, he turns into a replica of the person to whom they belong. With interesting consequences! Max is played by Adam Sandler, totally convincing in the role of this disappointed, miserable man who doesn’t resent his mother for a minute. The friendly barber next door is played by Steve Buscemi, extremely likeable in the role. The film sets out very clearly (though unobtrusively) the rules of the premise: he looks like the person as they look right now (even if they are dead), he takes on their voice and accent, he has to wear both shoes, and they must fit his size ten and a half feet.

Though I liked the film overall, a few things bugged me. The music tries a bit hard, and Max takes off his shoes in some very daft situations, places, for example, where he wouldn’t want to leave fingerprints. It feels like that’s because we might otherwise go long stretches of the film without seeing its star. Max also seems unbelievably unconcerned about the real-world consequences for the people he impersonates. Fair enough when it’s a gangster, but putting on the shoes of a young teenager or a woman and using them to talk to that gangster? That was appalling. The trailer put me off by making it look like Max would use the shoes to impersonate men to have sex with their girlfriends; while still very unwelcome, this plays a tiny part in the film and he doesn’t go through with it (albeit because he can’t get in the shower without taking off his shoes). The main plot concerns a property developer who wants to get one last tenant out of an old block. As Max disguised himself to help I couldn’t help thinking that this was essentially the same plot as the Daredevil television series. And this film does feel a lot like a television pilot, even if the actors involved give it the heft of a movie. If there isn’t a series currently planned, I’m sure it will happen eventually: easy to imagine the cobbler pulling on a new pair of shoes each week and getting involved in a new set of scrapes. Stephen Theaker ***
Posted by Stephen Theaker