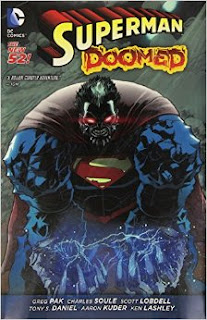 A young Superman is dating Wonder Woman rather than Lois Lane, and maybe that’s a good thing because Lois is currently under the control of Brainiac, who is in deep space, preparing to add the people of Earth to his collection. That would be trouble enough, but what’s more Doomsday, the monstrous product of Kryptonian science, has been resurrected, this time with the brand new ability to drain the life from anything nearby. (It isn’t clear whether Doomsday has killed Superman yet in this new reality.) Superman decides that there’s only one way to stop the monster for good, and rips it to bits, and then, erm, inhales what’s left, and is thus infected himself. He has Doomsday’s rage, strength, bony bits, and tendency to suck the life out of a room. How to fight off Brainiac’s attack when it’s not safe for the Man of Steel to be on Earth any more? This is a chunky five hundred page book on Comixology, though in print it would be even longer because all the double page spreads count as one page each on Comixology. It’s surprising to see so many of them here: they are a pest to read on a tablet (and don’t look much better in a print collection). It’s almost like print issue devotees are deliberately throwing their clogs in the digital works. The book collects material from eight different titles, including five issues each of Action Comics and Superman/Wonder Woman, and there are sections where the art style changes every few pages; it’s a jigsaw where each piece was drawn by a different person, but somehow it hangs together pretty well. It’s quite contrived, since so much of the story hangs on Superman acquiring powers from Doomsday that Doomsday doesn’t usually have. Perhaps it was felt that involving Parasite in the story wouldn’t have had the same heft. The Doomsday angle feels like it’s been bolted on to beef up the Brainiac story, a feeling reinforced by the way it’s eventually resolved, as an afterthought. Many other DC characters make an appearance. Batman, Steel, Lana and Wonder Woman come across very well, and it’s interesting to see the ways that different artists cope with the shame of having to draw Supergirl in her current costume! They cover it up with her cape, draw her from the waist up, or lengthen the sides to turn it into more of a jumpsuit, which is a big improvement. We don’t get to see much of the new young Superman’s personality in this book, what with the Doomsday infection and everything, but his costume looks weirdly unbalanced without the red underpants. Stephen Theaker ***
Posted by Stephen Theaker