A Princess of the Linear Jungle, by Paul Di Filippo (PS Publishing) | review by Stephen Theaker 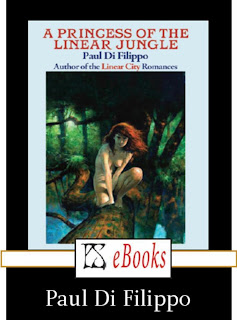 This novella begins with a quotation from A Princess of Mars (a book by Edgar Rice Burroughs), mentions in passing an exhibit called The Diaries of Cadwal Throy (referencing Jack Vance) and the lead character is called Merritt Abraham (a nod, as you might guess, to Abraham Merritt), which gives the reader an idea of what to expect.

It begins with Merritt, aged twenty-two, on a two-masted sailing boat, upon a river which runs parallel to a very long city. On the boat with her are a small group of colourful characters who are all sleeping with each other whenever they can lay claim to a quiet spot. Merritt has left her home in Stagwitz to start work at Swazeycape University.

She would rather be studying polypolisology there, but can’t afford it. She will at least be able to audit classes (attend without gaining a qualification). Unfortunately, this leads her into a relationship with louche Professor Arturo Scoria, who is planning an expedition into Vayavirunga, a borough that was over-run by plant life, walled off, and best left that way.

The ebook, which is currently available on Kindle Unlimited, as well as directly from the publisher, features some confusing errors that weren’t in the original (and sold-out) print version, such as “then on-threatening” suitor, or “my parent son the River”. There are also places where it seems like both options in a tracked changes document have been typeset.

Nevertheless, I thoroughly enjoyed the story of this clearly doomed (as one can tell from them taking a nightclub singer along to pose for photographs!) expedition. The Linear City seems to be an ideal setting for fantastical stories, and the strange Pompatics that float above it lead the story in some startling directions. A strange and vivid book. Stephen Theaker ****