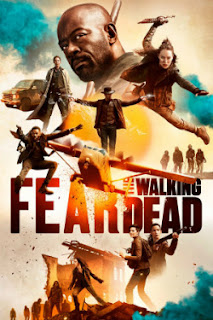 Previous seasons of Fear the Walking Dead reminded me of the Fallout games, but this one really goes for it.

This is a show that never met a status quo it liked, and so the situation established at the end of season four is immediately gone: some of the characters have crashed their plane in a new area and all the roads out are blocked. It feels like a typical Fallout DLC adventure, a self-contained location where they have a few situations to resolve before they can escape.

What makes it even more like Fallout is that some areas are dangerous because of high levels of radiation, there are radioactive zombies, and we (briefly) meet some people who seem very much like the Brotherhood of Steel. The second half of the season finds them back where they were at the end of season four, more or less, but their convoy is gathering steam. This storyline introduces an evil version of the Minutemen from Fallout 4.

The zombies in this season really were extraordinarily useless. They flail around ineffectively like the zombies in a children’s programme and (spoiler incoming) we do not see them bite, let alone eat, a single person in the entire sixteen episodes. They do manage to eat a horse at one point. We meet a new guy who got bitten before we meet him. And in a flashback we hear them get a character we never met over the radio. It’s hard to feel fear when the zombies offer so little threat to the protagonists.

Another funny thing is that at one point some kids use zombies to turn a wheel and everyone is like, haha very clever, and then they go back to fighting about petrol, not realising that the kids have created a perpetual motion machine! It could change the world! (It does raise the question of where the energy comes from if the zombies aren’t eating anything. Perhaps they feed on the bugs that crawl into their mouths. Or maybe they start to photosynthesize. Someone should do an experiment to see if zombies lose body mass when they exercise.)

The characters in this programme have always driven me up the wall with their terrible decision-making, and it’s no different this season, where everyone gets a bad case of the fates and faiths and why are we heres and this is our purposes. They do some utterly idiotic things, like wandering off to paint trees while leaving their most important resources virtually unprotected. They make a video of themselves, leave it everywhere for people to watch, and then are completely baffled to discover that their enemies now know their names and weaknesses.

But for all its flaws I loved watching it, like I do every year – I bought it outright because I couldn’t wait for it to appear on Amazon Prime Video for free. I had got to the point where I didn’t want to watch anything else till I had watched it. And after seeing how some people have behaved during the Covid-19 crisis, can we still criticise television characters for stupid, self-defeating behaviour during a crisis? Can I complain about them standing right next to zombies when everyone here seems to think a two-metre distance means two steps away?

And there were some things I liked about this season, such as Morgan’s determination to be a force for good in the world, even if he went on about it a bit too much. I admire Althea’s determination to create a visual record of what has been happening. The relationship between John Dorie and June is genuinely sweet. Colby Hollman and Karen David are very good as newcomers Wes and Grace, and Colman Domingo never met a line he couldn’t deliver in an interesting way. Not a vintage season, then, but still a show I love to watch. Can’t wait to see what communities they leave devastated in season six. Stephen Theaker ***