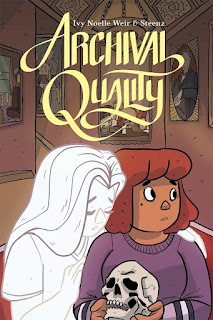 Because I read this 280pp graphic novel without reading the back cover first (“a surprisingly vulnerable, intricate look at mental health”, says Kate Leth), I thought it was going to be the story of someone who discovers weird things going on in a library. That does indeed happen, but this is really about someone who is depressed and doesn’t like the way her boyfriend handles it. For me that was somewhat disappointing, but other readers may feel differently.

Celeste Walden lost her previous job as a library assistant after being overwhelmed by her mental health issues (variously diagnosed by doctors as anxiety, bipolar disorder and depression), when she stopped taking her medication. We find out later that she didn’t graduate from college, perhaps for similar reasons.

She finds a new position as an image archivist at the Logan Museum, which was once a psychiatric hospital. Her new boss, Abayomi Abiola, is good-looking but cold and secretive, while her direct supervisor, Holly the head librarian, seems nice. Celeste has to work through the night, and lives in an apartment on site, where she begins to have strange dreams of a woman who had a procedure in the hospital long ago.

I quite enjoyed reading this, though it was a long and drawn-out way to tell what in the end is a short and simple story. The art is nice enough, cartoonish and chunky, even if it felt a little odd to have an adult woman drawn as if she were a toddler. Perhaps that was to reflect how she felt.

The most off-putting thing for me was how she treats her long-term boyfriend. I don’t think we are supposed to like him – the first time we meet him he calls her a loser, as a joke at just the wrong time – but I found him a much more sympathetic character than Celeste, doing his best to patiently encourage and support her, while she treats him terribly. That might be a realistic portrayal of how people with mental health issues sometimes treat the people who love them, but the way the story rewards her treatment of him with a new romantic interest felt way off.

I wouldn’t queue up for a sequel, but it may find its fans. Stephen Theaker ***