The Hidden People by Alison Littlewood | review by Stephen Theaker 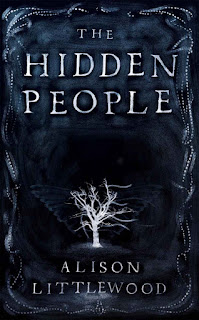 The Hidden People (Jo Fletcher Books) is in my view Littlewood’s best novel yet [mid-2017]. While her earlier books from this publisher seemed to be aimed in part at the thriller market, this is a sustained and convincing work of traditional gothic horror. Posh Albie, who ran into his attractive cousin Elizabeth Thurlston at the Great Exhibition of 1851, is floored years later to hear that she has been murdered by her lower-class husband, and not murdered in any ordinary way, but roasted over an open fire, in the belief that she was a changeling and cooking the creature would bring back his wife. Albie travels to Halfoak (“our folk”) in Yorkshire to attend her funeral, and then, angered by the lack of respect he sees, stays to investigate her death, making the peculiar decision to live in her cottage while her husband and murderer sits in prison.

Albie might have married Lizzie himself if she hadn’t been of a slightly lower class, and he thoroughly regrets it. Such class differences play a major role in the book: telling the story in the first person, he obsessively apostrophizes each time an interlocutor fails to enunciate a letter, and upon eventually reading Lizzie’s hidden journal, he has “some small gratitude that although she may have neglected in life to pronounce her aitches, she had not forgotten to write them”. On the train to Halfoak, he ruminates on “the unease … between progress and country, rationalism and superstition”, and the book is all about his attitude to those superstitions, how beneath him these ideas (and these people) are, even as he arrives step by step at believing them himself. This creates a maddening tension in him, and when his wife comes to join him at the cottage, things only get worse.

One of the book’s most terrifying scenes shows him dashing frantically around the cottage on a stormy night, stuffing pages torn from her copy of Wuthering Heights into every nook and cranny in hopes of stopping “the hidden folk” from entering. We feel his fear, but we also know how much the book means to his wife, and for all we know he might be ripping it up for nothing. By this point he has become an unreliable narrator, and the book refuses to confirm for us whether Albie lives in a supernatural universe or not, so readers are forced into the same situation as him, unable to know what has really happened, not knowing who can be trusted, and not knowing the right decision.****