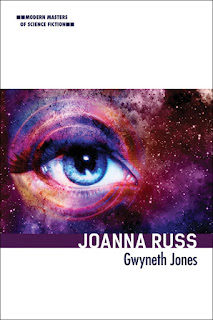 A new entry in the Modern Masters of Science Fiction covers the life and work of Joanna Russ in seven fascinating chapters. It also includes thirteen pages of interviews, a useful ten-page bibliography of her work, and an index (not available in the review copy, as is generally the case).

It provides context for the writing, telling us about her life, and doesn’t generally fall into the trap of assuming that there must be a direct connection between the two, though a clear motive is sometimes assigned to negative reviews, both those she wrote and those she received.

The book sensitively addresses some elements of Russ’s work that might prove sticky for present-day readers, such as underage sexuality in The Female Man and And Chaos Died, and what is read as a cure for homosexuality in the latter.

Where it perhaps sets a foot wrong is in asking about The Female Man, “How do you design an ideal, female-ordered world, when all the models of utopia are manmade?” Whileaway is a place where women must spend so much of their adult lives working that there is no time for art. Surely that’s not being put forward as an ideal?

That aside, this will be gold dust for any student planning to write an essay on Joanna Russ or any of her books. It’s the kind of overview that makes your eyes light up when you find it in the library, that helps you properly understand the book you’re studying, and alerts you to other works you should be looking at too.

And of course it is also useful for those of us who have read a few of Joanna Russ’s books and not necessarily felt confident of having grasped their meaning. It encouraged me to read more of her work, though unfortunately much of it is out of print in the UK.

To get The Adventures of Alyx and Extra (Ordinary) People, I had to buy tea-stained secondhand copies of the same Women’s Press editions my mum had when I was a child. Russ didn’t write a colossal amount of science fiction. A Library of America edition gathering it all together would be just the ticket. Stephen Theaker ****