Theaker's Quarterly Fiction #67: now out in paperback and ebook! 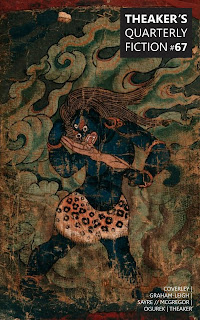 This issue features three science fiction stories. In "A Gift for the Young" by Elaine Graham-Leigh, a visitor from Chi!me visits a divided world. "The King of Nod" by Harris Coverley lets us join an extraction team on their way to retrieve a criminal, who was sent long ago to prepare a world for colonisation. And "Broken" by A.T. Sayre introduces us to some robots with significant issues.

And the films Angel Heart, The Invisible Man and A Rainy Day in New York, and the television programmes Castle Rock season two, Fear the Walking Dead season five and Westworld season three.

This issue's cover features a gouache painting by a 19th century Tibetan artist, of a Tibetan demon devouring a human, from the Europeana Collections (CC BY 4.0).

Harris Coverley has short fiction published or forthcoming in Curiosities, Planet Scumm, Horror Magazine and The J.J. Outré Review. He is also a Rhysling-nominated poet and member of the Weird Poets Society, with verse most recently accepted for Star*Line, Utopia Science Fiction, Awen, New Reader Magazine, Clover & White and The Oddville Press, amongst others. He lives in Manchester, England.

Elaine Graham-Leigh is a writer and campaigner based in London. When not bringing down the system from within, she writes speculative fiction and has had previous stories published in Theaker’s Quarterly Fiction, Jupiter SF, Bewildering Stories and The Harrow. Her website can be found at www.redpuffin.co.uk. Her first novel, The Caduca, is planned for publication by the Conrad Press in autumn 2020.

A.T. Sayre has been writing in some form or other for over three-quarters of his life, ever since he was ten years old. His work has previously appeared in Andromeda Spaceways Inflight Magazine, Analog Science Fiction and Fact, and StarShipSofa. A more detailed list of his publications can be found at www.atsayre.com/fiction. Born in Kansas City, raised in New Hampshire, he lives in Brooklyn and likes to read in coffeehouses.

Stephen Theaker is known for his watertight style and flamboyant plumbing.