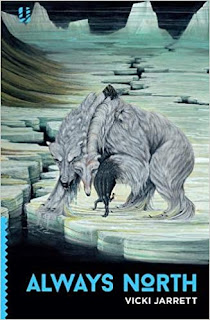 In the year 2025, Isobel is on board the Polar Horizon, a ship surveying for oil at the north pole. A nuclear-powered icebreaker joins them, to force a way through what ice remains. This first part of the book is exciting and tense, the atmosphere rather like The Thing on a boat, with a similarly characterful crew, and with a highly focused polar bear as the threat. It feels very grounded in reality, albeit with references to Where the Wild Things Are: “We’ll sail off through night and day, in and out of weeks for almost over a year. Only this time there will be no nights.”

Then something big and devastating happens, and we move into a new phase of the book, showing the consequences of a story we only half-know and taking us to some weirder places. Eventually the book returns to telling the original story, but in a more fractured way, and it’s a little bit frustrating – as if someone cracked the television screen halfway through watching a film. Another consequence is that from this point on the reader has reason to doubt what we are being told is happening, which inevitably places a barrier between the story and our emotions. But it’s still a good story, even told this way.

The ending was disappointing at first, then a bit less disappointing after thinking about what it meant for earlier parts of the book, and then disappointing again when I started to ask myself what the plan was ever meant to be. But as a warning of environmental catastrophe, the book is very effective, and its portrayal of social breakdown is convincing. And I loved its depiction of the high-pressure situation on board the Polar Horizon, the effect that loneliness, lack of sleep, secrets, money and sex would have on people spending far too long together in close quarters. Stephen Theaker ***