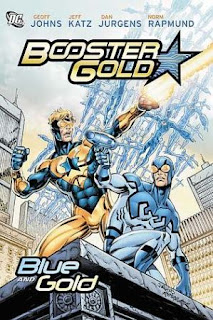 I'm very fond of Blue Beetle and Booster Gold. I think the first time I heard of them was when they got beaten up in The Death of Superman trade paperback, but it wasn't long after that I read their adventures in Justice League (International). Later I read Ted Kord's original series, and more recently Booster's too, collected in Showcase Presents Booster Gold, both of which were solid but not spectacular. It was brilliant to see them teamed up again in Formerly Known as the Justice League and I Can't Believe It's Not the Justice League, but immensely disappointing to see what happened to Blue Beetle during one of the innumerable crises to beset the DC universe.

Booster Gold, now a defender of the time stream - the poacher turned gamekeeper - working for Rip Hunter was even more unhappy about it, and rescued Ted from the fatal moment. He returns to the present. The ramifications? Wonder Woman didn't get angry enough to snap Maxwell Lord's neck, the OMAC project was a success, and most superheroes are now dead. Even set against Booster and Gold's past screw-ups, that qualifies as a bad day.

It's wonderful to see Booster and the Beetle together again, even if we know it can't last. Geoff Johns and Jeff Katz write them as more or less capable heroes who use humour to cope with their dangerous lives, rather than complete jokes. I've always enjoyed the unfussiness and clarity of Dan Jurgens' art, and under modern colouring and printing it looks very fine indeed - although one wonders, given that Jurgens created Booster Gold, whether it was a little odd for him to cede the writing duties to other people. It's odd in general to think of people losing all control over their own creations, but I guess that's how it goes at the big two: it's easy to see why Erik Larsen didn't hand the Savage Dragon over to Marvel.

Returning to the story, it's not stunning, basically a What If?/Days of Future Past type thing, but I enjoyed it. Affection and nostalgia count for an awful lot in comics.