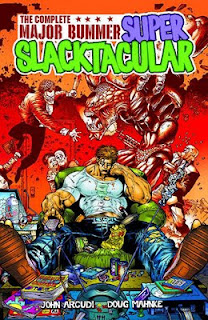 Lou Martin (he doesn’t actually call himself Major Bummer, sadly) got his super-strength, invulnerability and super-smarts thanks to a mailing mix-up, and he doesn’t really appreciate the effect they’re having on his life, especially since they came bundled with a magnetic attraction for similarly blessed/cursed individuals. That brings him friends he doesn’t want, like a time-travelling pensioner, the wall-climbing Gecko, a theatrical sonic screamer and a flying girl with a crush on him and a handy viewing panel in her costume’s midriff. Worse, it brings him enemies like an English guy with an inflated skull and an intelligent [spoiler!], Nazi dinosaur Tyrannosaurus Reich, and a bunch of gang-members too dumb to do anything interesting with their powers. The aliens who handed out the powers have parked their invisible spaceship in a nearby junkyard, and provide a plot prod every issue or two.

This book collects all fifteen issues of the original DC series. In tone it resembles contemporary Hitman’s wackier episodes; these guys would get on well with Section 8. Unlike Hitman it doesn’t take place in the DC universe, which can’t have helped sales, but it does give the book a self-sufficiency unusual in DC’s main line. There are light soap opera elements, and the characters trot from one story to the next without any of it seeming all that important. It’s all very amiable, but when a series is this short-lived, it’s difficult to read it (or watch it, with TV programmes) without that niggle at the back of your mind: what was the problem with this? Sometimes it’s easy to figure out: Extreme Justice! Sometimes it’s utterly baffling: Firefly! Major Bummer is amusing, rather than laugh-out loud funny, but its bigger problem was perhaps that its least interesting character was its protagonist. That’s kind of the idea of the book - a slacker superhero - but it leaves a gap at its centre where the person you want to read about should be.

Still, I had a lot of fun reading it. Admittedly, put a fifteen-issue run of almost any comic in a book and I’ll enjoy it, but this one had some funny ideas (the size-changing, expressionless cat was always good value) and it explores them well, particularly towards the end as Lou starts to time travel and dimension hop. The artwork is much easier on the eye than the slightly cluttered cover to issue one made me expect, back when it was first published. By the end of the book, I kind of wish I’d collected it back then, because with time this could have developed into something special, and maybe an extra reader or two would have given it that time.